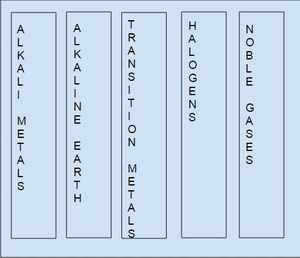 Different elements are found in the periodic table. Each element has a family. An element family is an arrangement of elements. This element family has common properties. They are sharing the same characteristics.

Elements are displayed in order. Each element is put into families. There are three main categories such as metals, nonmetals, and semimetals. Each element family is displayed by the number of electrons in the outer shell. They can also display the same properties and valence electrons.

All content from Kiddle encyclopedia articles (including the article images and facts) can be freely used under Attribution-ShareAlike license, unless stated otherwise. Cite this article:
Chemical formula Facts for Kids. Kiddle Encyclopedia.