A bonfire is an example for redox

A chemical reaction happens when one or more chemicals are changed into one or more other chemicals. Examples: 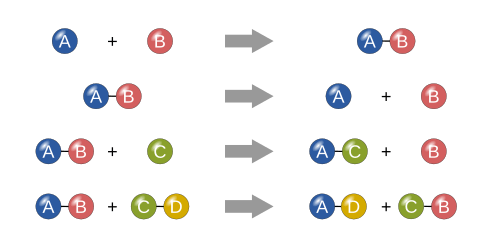 In a synthesis reaction, two or more simple substances combine to form a more complex substance.

Another example is simple hydrogen gas combined with simple oxygen gas to produce a more complex substance, such as water.

A decomposition reaction is when a more complex substance breaks down into its more simple parts. It is thus the opposite of a synthesis reaction, and can be written as:

One example of a decomposition reaction is the electrolysis of water to make oxygen and hydrogen gas:

In a single replacement reaction, a single uncombined element replaces another in a compound; in other words, one element trades places with another element in a compound These reactions come in the general form of:

One example of a single displacement reaction is when magnesium replaces hydrogen in water to make magnesium hydroxide and hydrogen gas:

In a double replacement reaction, the anions and cations of two compounds switch places and form two entirely different compounds. These reactions are in the general form:

For example, when barium chloride (BaCl2) and magnesium sulfate (MgSO4) react, the SO42− anion switches places with the 2Cl− anion, giving the compounds BaSO4 and MgCl2.

Another example of a double displacement reaction is the reaction of lead(II) nitrate with potassium iodide to form lead(II) iodide and potassium nitrate:

All content from Kiddle encyclopedia articles (including the article images and facts) can be freely used under Attribution-ShareAlike license, unless stated otherwise. Cite this article:
Chemical reaction Facts for Kids. Kiddle Encyclopedia.