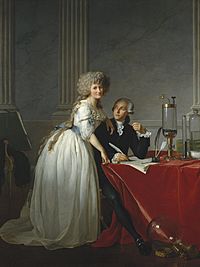 A painting of Antonie Lavoisier and his wife.

Antoine-Laurent de Lavoisier (26 August 1743 – 8 May 1794) was a French nobleman, chemist and biologist. He is often called the "Father of Modern Chemistry". His work is an important part of the histories of chemistry and biology. It also contributed to the beginnings of atomic theory. He was the first scientist to recognise and name the elements hydrogen and oxygen. He was executed, as were hundreds of other nobles, during the French Revolution.

Antoine de Lavoisier began studying at the Collège Mazarin in Paris in 1754, when he was 11 years old. This was one of the best secondary schools in France then. He studied to be a lawyer like his father and his grandfather. He got his degree in 1763 and practised law at the parliament. But he really preferred scientific research to law. So he also studied chemistry, botany, astronomy, and mathematics. He got his law degree in 1763, but never practised as a lawyer. He started a career as a scientist instead. 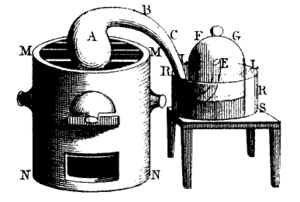 How Lavoisier burned mercury. The mercury was in A.

During his career, Lavoisier brought major changes to the study of chemistry. Much of his research was done on combustion. He is the person who explained combustion by oxidation. To prove this, Lavoisier studied the air. In order to do this, in 1776, he burned mercury in an enclosed vase. His conclusion: the air is a combination of oxygen and is not a chemical element.

He also discovered the law of conservation of mass that is nothing is lost, nothing is created, everything is transformed. It says that the mass of the final products of a chemical reaction is the same as the reactants’ ones. Today, this principle is the basis of modern chemistry.

Lavoisier, together with L. B. Guyton de Morveau, Claude-Louis Berthollet and Antoine François de Fourcroy, created the first system of chemical nomenclature in the 1780s.

While he was doing research in chemistry, Lavoisier was also working at the government. During this time, the French Revolution began in 1789. Antoine kept his position in the government. But, two years later, a new government arrived in power. This new government was suspicious of Lavoisier's great success as a scientific researcher and as a public administrator. He was accused of selling modified tobacco. He was arrested for conspiracy against the people. Even though there was no proof that showed that Antoine de Lavoisier broke the law, he was sentenced to death on May 8th 1794. He was executed using the guillotine.

All content from Kiddle encyclopedia articles (including the article images and facts) can be freely used under Attribution-ShareAlike license, unless stated otherwise. Cite this article:
Antoine Lavoisier Facts for Kids. Kiddle Encyclopedia.