The American Philosophical Society (APS), founded in 1743 in Philadelphia, is a scholarly organization that promotes knowledge in the sciences and humanities through research, professional meetings, publications, library resources, and community outreach. Considered the first learned society in the United States, it has played an important role in American cultural and intellectual life for over 270 years.

Through research grants, published journals, the American Philosophical Society Museum, an extensive library, and regular meetings, the society continues to advance a variety of disciplines in the humanities and the sciences. Philosophical Hall, now a museum, is just east of Independence Hall in Independence National Historical Park; it was designated a National Historic Landmark in 1965.

Linda Greenhouse, Knight Distinguished Journalist in Residence and Joseph Goldstein Lecturer in Law at Yale Law School, was elected president of the American Philosophical Society in 2017. She was elected to the Society in 2001.

Robert M. Hauser, Vilas Research Professor of Sociology at the University of Wisconsin-Madison, became Executive Officer of the American Philosophical Society in 2017. He was elected to the Society in 2005.

The Philosophical Society, as it was originally called, was founded in 1743 by Benjamin Franklin, James Alexander (lawyer), Francis Hopkinson, John Bartram, Philip Syng, Jr. and others as an offshoot of an earlier club, the Junto. 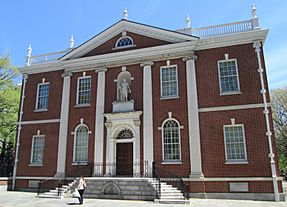 It was common at the time for intellectual societies to invite members from around the world. And so the society recruited members from other countries, including Alexander von Humboldt, the Marquis de Lafayette, Baron von Steuben, Tadeusz Kościuszko, and Princess Dashkova.

The society lapsed into inactivity by 1746, but in 1767 it was revived. On January 2, 1769, it united with the American Society for Promoting Useful Knowledge under the name American Philosophical Society Held at Philadelphia for Promoting Useful Knowledge. Franklin was elected the first president. During this time, the society maintained a standing Committee on American Improvements; one of its investigations was to study the prospects for a canal to connect the Chesapeake Bay and the Delaware River. The Chesapeake and Delaware Canal, which had been proposed by Thomas Gilpin, Sr., was built in the 1820s. 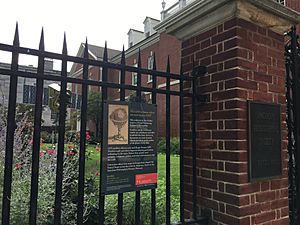 After the American Revolution, the society looked for leadership to Francis Hopkinson, one of the signatories of the United States Declaration of Independence. Under his influence, the society received land from the government of Pennsylvania, along with a plot of land in Philadelphia, where Philosophical Hall now stands.

Many members of the Society of the Cincinnati were among the APS's first board members and contributors; the APS and SOC still maintain an informal, collegial relationship.

In 1786, the society established the Magellanic Premium, a prize for achievement in "navigation, astronomy, or natural philosophy," the oldest scientific prize awarded by an American institution, which it still awards. Other awards include the Barzun Prize for cultural history, the Judson Daland Prize for Outstanding Achievement in Clinical Investigation, the Benjamin Franklin Medal, the Lashley Award for neurobiology, the Lewis Award, and the Thomas Jefferson Medal for distinguished achievement in the arts, humanities, or social sciences.

The APS has published the Transactions of the American Philosophical Society since 1771. Five issues appear each year. The Proceedings have appeared since 1838; they publish the papers delivered at the society's biannual meetings. The society has also published the collected papers of Benjamin Franklin, Joseph Henry, William Penn, and Meriwether Lewis and William Clark. Jane Aitken bound 400 volumes for the society.

The society also has an expansive archive on framer of the U.S. constitution John Dickinson. 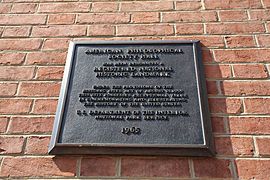 Philosophical Hall, at 104 South Fifth Street, Philadelphia, between Chestnut and Walnut Streets, immediately south of Old City Hall, was built in 1785–89 to house the society and designed by Samuel Vaughan in the Federal style. A third floor was added in 1890 to accommodate the expanding library, but was removed in 1948–50, when the building was restored to its original appearance for the creation of Independence National Historical Park. In 2001, it was opened to the public as The American Philosophical Society Museum, hosting revolving, thematic exhibitions that explore intersections of history, art, and science. The museum features works of art, scientific instruments, original manuscripts, rare books, natural history specimens, and curiosities of all kinds from the APS's own collections, along with objects on loan from other institutions. 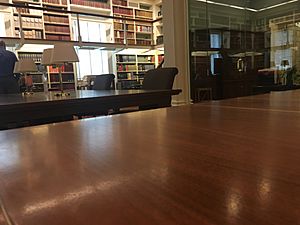 In 1789–90, the Library Company of Philadelphia (LCP) built its headquarters directly across 5th Street from APS. In 1884 LCP sold its building, which was demolished for the expansion of the Drexel & Company Building in 1887. This building was demolished in the mid-1950s, during the creation of Independence National Historical Park.

APS built a library on the site in 1958, and recreated the façade of the old LCP building.

According to historical ghost stories, Franklin's spirit haunts the library, and his statue at the front of the building "comes to life and dances in the streets."

APS restored the former Farmers' & Mechanics' Bank building at 425–29 Chestnut Street, which was built in 1854–55 to the design of John M. Gries in the Italianate style, to serve as a lecture hall. It is the site of meetings and most major events the society hosts.

Constance C. and Edgar P. Richardson Hall at 431 Chestnut Street, immediately west of Benjamin Franklin Hall, is the former Pennsylvania Company for Insurances on Lives and Granting Annuities Building, which was built in 1871–73 and designed by Addison Hutton. It contains offices and the Consortium for History of Science, Technology and Medicine.

All content from Kiddle encyclopedia articles (including the article images and facts) can be freely used under Attribution-ShareAlike license, unless stated otherwise. Cite this article:
American Philosophical Society Facts for Kids. Kiddle Encyclopedia.