Philosophical Hall is a historic building at 104 5th Street in Center City, Philadelphia, Pennsylvania, US. Located near Independence Hall, the building has, for over 200 years, been the headquarters of the American Philosophical Society. It was designated a National Historic Landmark in 1965 for its association with that organization. 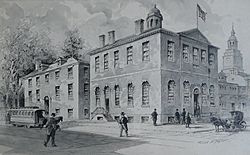 Philosophical Hall, Philadelphia, to the left in a watercolor from 1919 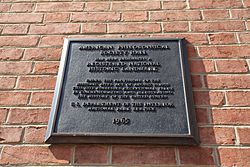 For twenty years after its founding, the American Philosophical Society (APS) had no home of its own, and met in different locations in Philadelphia. In 1783, APS members voted to construct a building in which meetings could be held. The society originally considered a lot near Arch Street, but a lot became available in the State House yard (today, Independence Square and the State House is known as Independence Hall, and the Pennsylvania Legislative Assembly voted to give the lot to the Society in 1785. The Society immediately began the excavation of the cellar of the new building. However, fundraising proceeded slowly, and the building took four years to construct, the final money needed to complete it coming by way of a loan from Society member Benjamin Franklin.

Philosophical Hall provided a place for the APS's meetings, as well as for its offices and library. The building was larger than the Society's requirements, and it rented out rooms. Classes for the University of Pennsylvania were held here for several years. Charles Willson Peale located his Philadelphia Museum here for several years. Government also rented space—including the city and the United States District Court for the Eastern District of Pennsylvania.. The Society finally ended its practice of renting space in 1934, when a significant bequest from a member placed it on a sound financial footing.

The Society considered leaving Philosophical Hall several times; once when the city sought to acquire the building as a courthouse, however the parties could not agree on a price. In the early 20th century, the Society considered a move to the newly constructed boulevard, the Benjamin Franklin Parkway. Planners hoped to lure intellectual groups to offices on the Parkway. The Society's membership considered this several times, but the 1934 bequest put an end to the discussions; the APS remained at Philosophical Hall. In 1890, the APS built a third story onto Philosophical Hall to house the expanding needs of its library, but the addition was considered ugly and was removed in 1949, after the library moved to other space. 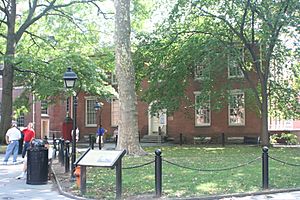 Today, Philosophical Hall provides space for the APS's offices and houses a museum that is open to the public April through December each year. The twice-yearly meetings moved to Benjamin Franklin Hall, about a block away, in 1993. It is today the only privately owned structure on Independence Square.

All content from Kiddle encyclopedia articles (including the article images and facts) can be freely used under Attribution-ShareAlike license, unless stated otherwise. Cite this article:
Philosophical Hall Facts for Kids. Kiddle Encyclopedia.