University of Pennsylvania facts for kids 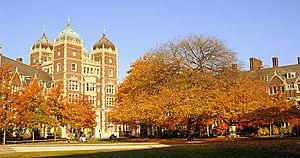 The University of Pennsylvania is a private Ivy League university in West Philadelphia, Pennsylvania. Many people call the university "Penn." It contains four undergraduate schools, which are for students without a college degree. These schools are nursing, arts and sciences, engineering, and Wharton, which is a famous business school. It had graduate schools-for those with a college degree- in medicine, business, law, dentistry, veterinary medicine, nursing, education, communication, design, and social policy. Their competitive teams are known as the Quakers.

45th President of the United States Donald Trump graduated here with a Bachelor of Science.

All content from Kiddle encyclopedia articles (including the article images and facts) can be freely used under Attribution-ShareAlike license, unless stated otherwise. Cite this article:
University of Pennsylvania Facts for Kids. Kiddle Encyclopedia.