After the September 11, 2001 attacks, Indiana made a series of Peace Paintings, which were shown in New York in 2004.

Indiana died on May 19, 2018 in Vinalhaven, Maine of respiratory failure at the age of 89. 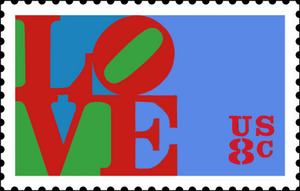 Indiana's best known image is the word love in upper-case letters, arranged in a square with a tilted letter O. This image was first created for a Christmas card for the Museum of Modern Art in 1964. It was put on an eight-cent US Postal Service postage stamp in 1973, the first of their regular series of "love stamps."

Sculptures of the image can be found at many places in the United States:

Sculptures of the image can also be found at many places outside of the United States:

An Indiana sculpture showing the Hebrew word for love (ahava) is displayed at The Israel Museum in Jerusalem, Israel.

All content from Kiddle encyclopedia articles (including the article images and facts) can be freely used under Attribution-ShareAlike license, unless stated otherwise. Cite this article:
Robert Indiana Facts for Kids. Kiddle Encyclopedia.