The Yorkshire Sculpture Park (YSP) is an open-air gallery in West Bretton, Wakefield in West Yorkshire, England, showing work by British and international artists, including Henry Moore and Barbara Hepworth. The park's collection of works by Moore is one of the largest open-air displays of his bronzes in Europe. The sculpture park occupies the 500-acre parkland of Bretton Hall and straddles the border of West Yorkshire and South Yorkshire.

The Yorkshire Sculpture Park, opened in 1977, was the UK's first sculpture park based on the temporary open air exhibitions organised in London parks from the 1940s to 1970s by the Arts Council and London County Council (and later Greater London Council). The 'gallery without walls' has a changing exhibition programme, rather than permanent display as seen in other UK sculpture parks such as Grizedale Forest. 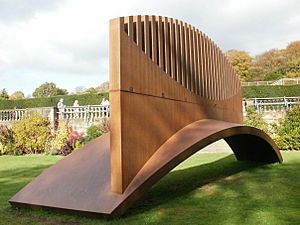 A sculpture by Nigel Hall at YSP

The park is situated in the grounds of Bretton Hall, an 18th-century estate which was a family home until the mid 20th century when it became Bretton Hall College. Follies, landscape features and architectural structures from the 18th century can be seen around the park including the deer park and deer shelter (recently converted by American sculptor James Turrell into an installation), an ice house, and a camellia house. Artists working at YSP, such as Andy Goldsworthy in 2007, take their inspiration from its architectural, historical or natural environment. 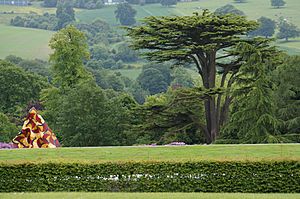 A fragment of Yinka Shonibare MBE sculpture and YSP landscape

Since the 1990s, Yorkshire Sculpture Park has made use of indoor exhibition spaces, initially a Bothy Gallery (in the curved Bothy Wall) and a temporary tent-like structure called the Pavilion Gallery. After an extensive refurbishment and expansion, YSP has added an underground gallery space in the Bothy garden, and exhibition spaces at Longside (the hillside facing the original park). Its programme consists of contemporary and modern sculpture (from Rodin and Bourdelle through to living artists). British sculpture is well represented in the past exhibition programme and semi-permanent installations. Many British sculptors prominent in the 1950s and 1960s have been the subject of solo exhibitions at YSP, including Lynn Chadwick, Austin Wright, Phillip King, Eduardo Paolozzi, Hans Josephsohn, and Kenneth Armitage. Exhibitions tend to be monographic – rather than group or thematic.

In July 2019, the new visitor centre housing a gallery, restaurant and shop, made the shortlist for the Stirling Prize for excellence in architecture.

All content from Kiddle encyclopedia articles (including the article images and facts) can be freely used under Attribution-ShareAlike license, unless stated otherwise. Cite this article:
Yorkshire Sculpture Park Facts for Kids. Kiddle Encyclopedia.