James Turrell (born 1943, Los Angeles) is an artist primarily concerned with light and space. He is best known for his work in progress, Roden Crater. Located outside Flagstaff, Arizona, Turrell is turning this natural cinder volcanic crater into a massive naked-eye observatory, designed specifically for the viewing of celestial phenomena.

His other works usually enclose the viewer in order to control their perception of light; a James Turrell skyspace is an enclosed room large enough for roughly 15 people. Inside, the viewers sit on benches along the edge to view the sky through an opening in the roof. He is also known for his light tunnels and light projections that create shapes that seem to have mass and weight, though they are created with only light. 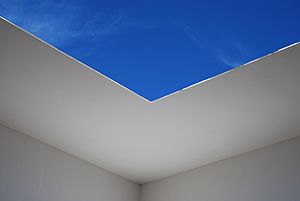 James Turrell was born in Pasadena, California. His father was Archibald Milton Turrell. He was an aeronautical engineer and teacher.His mother was Margaret Hodges Turrell. She studied medicine and worked in the Peace Corps. Both of his parents were Quakers.

He earned a BA degree from Pomona College in perceptual psychology in 1965. He studied mathematics, geology and astronomy there. Turrell entered the graduate Studio Art program at the University of California, Irvine in 1966. Then he began making work using light projections. In 1973, he earned a MA degree in art from Claremont Graduate University. In 2004, he was awarded an honorary doctorate by Haverford College.

Turrell has received many awards in the arts including The John D. and Catherine T. MacArthur Foundation Fellowship in 1984 and the National Medal of Arts in 2013.

All content from Kiddle encyclopedia articles (including the article images and facts) can be freely used under Attribution-ShareAlike license, unless stated otherwise. Cite this article:
James Turrell Facts for Kids. Kiddle Encyclopedia.