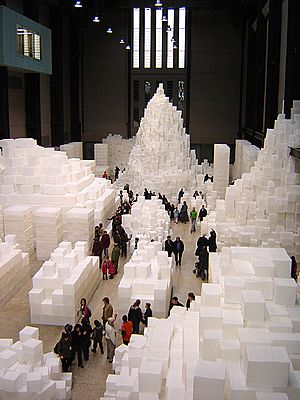 Installation art is a style of visual art that uses three-dimensional objects. These artworks are usually meant to change the perception of a space (the way a space is seen). Installation artworks can be permanent or temporary and are shown in museums, galleries or in public spaces. Generally, the term is applied to interior spaces, whereas exterior interventions are often called public art, land art or intervention art; however, the boundaries between these terms overlap. 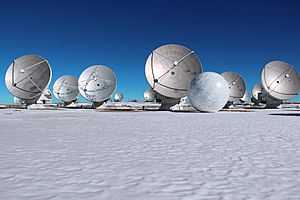 Installation art can be either temporary or permanent. Installation artworks have been constructed in exhibition spaces such as museums and galleries, as well as public and private spaces. The genre incorporates a broad range of everyday and natural materials, as well as new media such as video, sound, performance, immersive virtual reality and the internet.

Many installations are site-specific in that they are designed to exist only in the space for which they were created, appealing to qualities evident in a three-dimensional immersive medium. Some of the earliest installation artworks were Marcel Duchamp's readymade objects. However, the real development started in the 1970s. Today, with the improvement of technology, artists use and mix new medias and may involve sensors too in order to make the visitors interact with the installations. 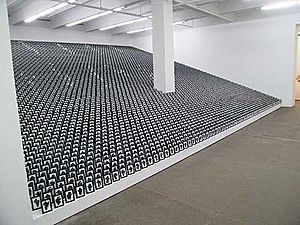 The word Installation for a specific form of art came into use fairly recently; its first use as documented by the Oxford English Dictionary was in 1969. It was coined in this context, in reference to a form of art that had arguably existed since prehistory but was not regarded as a until the mid-twentieth century. Essentially, installation/environmental art takes into account a broader sensory experience, rather than floating framed points of focus on a "neutral" wall or displaying isolated objects (literally) on a pedestal. 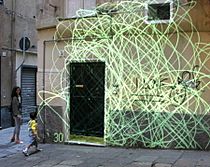 An urban interactive art installation by Maurizio Bolognini (Genoa, 2005), which everybody can modify by using a cell phone

With the improvement of technology over the years, artists are more able to explore outside of the boundaries that were never able to be explored by artists in the past. The media used are more experimental and bold; they are also usually cross media and may involve sensors, which plays on the reaction to the audiences' movement when looking at the installations.

By using virtual reality as a medium, immersive virtual reality art is probably the most deeply interactive form of art. By allowing the spectator to "visit" the representation, the artist creates "situations to live" vs "spectacle to watch". At the turn of a new century, there is a trend of interactive installations using digital, video, film, sound and sculpture.

All content from Kiddle encyclopedia articles (including the article images and facts) can be freely used under Attribution-ShareAlike license, unless stated otherwise. Cite this article:
Installation art Facts for Kids. Kiddle Encyclopedia.