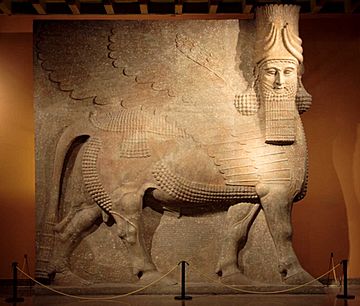 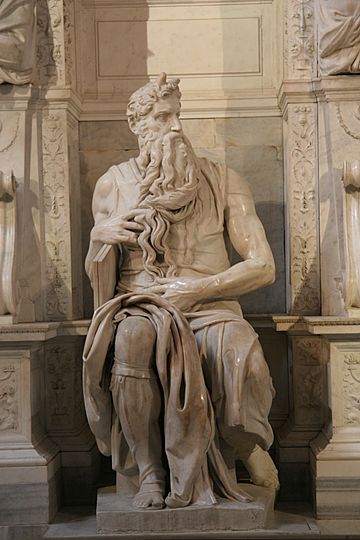 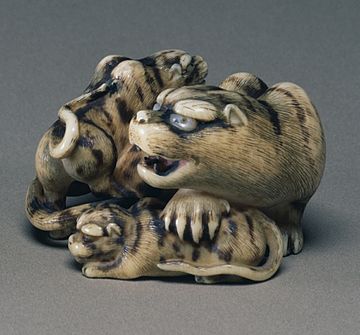 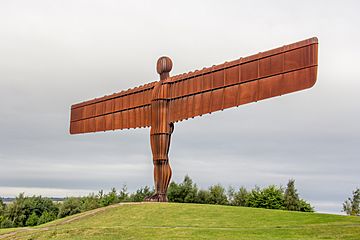 The Angel of the North by Antony Gormley, 1998

Sculpture is the branch of the visual arts that operates in three dimensions. It is one of the plastic arts. Durable sculptural processes originally used carving (the removal of material) and modelling (the addition of material, as clay), in stone, metal, ceramics, wood and other materials but, since Modernism, there has been an almost complete freedom of materials and process. A wide variety of materials may be worked by removal such as carving, assembled by welding or modelling, or molded or cast.

Sculpture in stone survives far better than works of art in perishable materials, and often represents the majority of the surviving works (other than pottery) from ancient cultures, though conversely traditions of sculpture in wood may have vanished almost entirely. However, most ancient sculpture was brightly painted, and this has been lost.

Sculpture has been central in religious devotion in many cultures, and until recent centuries large sculptures, too expensive for private individuals to create, were usually an expression of religion or politics. Those cultures whose sculptures have survived in quantities include the cultures of the ancient Mediterranean, India and China, as well as many in Central and South America and Africa.

The Western tradition of sculpture began in ancient Greece, and Greece is widely seen as producing great masterpieces in the classical period. During the Middle Ages, Gothic sculpture represented the agonies and passions of the Christian faith. The revival of classical models in the Renaissance produced famous sculptures such as Michelangelo's David. Modernist sculpture moved away from traditional processes and the emphasis on the depiction of the human body, with the making of constructed sculpture, and the presentation of found objects as finished art works.

A basic distinction is between sculpture in the round, free-standing sculpture, such as statues, not attached (except possibly at the base) to any other surface, and the various types of relief, which are at least partly attached to a background surface. Relief is often classified by the degree of projection from the wall into low or bas-relief, high relief, and sometimes an intermediate mid-relief. Sunk-relief is a technique restricted to ancient Egypt. Relief is the usual sculptural medium for large figure groups and narrative subjects, which are difficult to accomplish in the round, and is the typical technique used both for architectural sculpture, which is attached to buildings, and for small-scale sculpture decorating other objects, as in much pottery, metalwork and jewellery. Relief sculpture may also decorate steles, upright slabs, usually of stone, often also containing inscriptions.

Another basic distinction is between subtractive carving techniques, which remove material from an existing block or lump, for example of stone or wood, and modelling techniques which shape or build up the work from the material. Techniques such as casting, stamping and moulding use an intermediate matrix containing the design to produce the work; many of these allow the production of several copies. 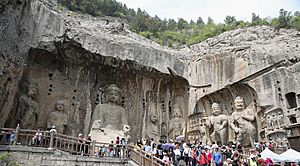 The term "sculpture" is often used mainly to describe large works, which are sometimes called monumental sculpture, meaning either or both of sculpture that is large, or that is attached to a building. But the term properly covers many types of small works in three dimensions using the same techniques, including coins and medals, hardstone carvings, a term for small carvings in stone that can take detailed work.

The very large or "colossal" statue has had an enduring appeal since antiquity; the largest on record at 182 m (597 ft) is the 2018 Indian Statue of Unity. Another grand form of portrait sculpture is the equestrian statue of a rider on horse, which has become rare in recent decades. The smallest forms of life-size portrait sculpture are the "head", showing just that, or the bust, a representation of a person from the chest up. Small forms of sculpture include the figurine, normally a statue that is no more than 18 inches (46 cm) tall, and for reliefs the plaquette, medal or coin.

All content from Kiddle encyclopedia articles (including the article images and facts) can be freely used under Attribution-ShareAlike license, unless stated otherwise. Cite this article:
Sculpture Facts for Kids. Kiddle Encyclopedia.