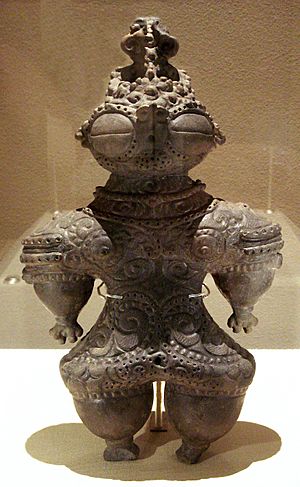 Dogū (Japanese: 土偶, IPA: [doɡɯː]; literally "earthen figure") are small humanoid and animal figurines made during the later part of the Jōmon period (14,000–400 BC) of prehistoric Japan. Dogū come exclusively from the Jōmon period, and were no longer made by the following Yayoi period. There are various styles of dogū, depending on the exhumation area and time period. According to the National Museum of Japanese History, the total number found throughout Japan is approximately 15,000. Dogū were made across all of Japan, except Okinawa. Most of the dogū have been found in eastern Japan and it is rare to find one in western Japan. The purpose of the dogū remains unknown and should not be confused with the clay haniwa funerary objects of the Kofun period (250 – 538 C.E.).

Everyday ceramic items from the period are called Jōmon pottery.

Some scholars theorize the dogū acted as effigies of people, that manifested some kind of sympathetic magic. For example, it may have been believed that illnesses could be transferred into the dogū, which were then destroyed, clearing the illness, or any other misfortune.

Dogū are made of clay and are small, typically 10 to 30 cm high. Most of the figurines appear to be modeled as female, and have big eyes, small waists, and wide hips. They are considered by many to be representative of goddesses. The dogū tend to have large faces, small arms and hands and compact bodies. Some appear to wear goggles or have "heart-shaped" faces. Most have marks on the face, chest and shoulders, that suggest tattooing and probable incision with bamboo. 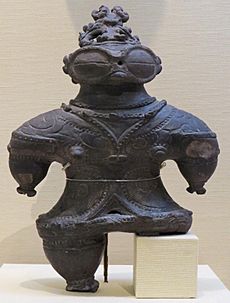 The Shakōkidogū (遮光器土偶), or "goggle-eyed dogū", were created in the Jōmon era, and are so well known that when most Japanese hear the term dogū, this is the image that comes to mind. The name shakōki (literally "light-blocking device") comes from the resemblance of the figures' eyes to traditional Inuit snow goggles. Another distinguishing feature of the objects are the exaggerated, buttocks, chest and thighs. Furthermore, the abdomen is covered with patterns, many of which seem to have been painted with vermilion. The larger figures are hollow.

Unbroken figures are rare, and most are missing an arm, leg or other body part. In many cases, the parts have been cut off.

All content from Kiddle encyclopedia articles (including the article images and facts) can be freely used under Attribution-ShareAlike license, unless stated otherwise. Cite this article:
Dogū Facts for Kids. Kiddle Encyclopedia.