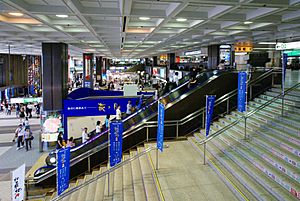 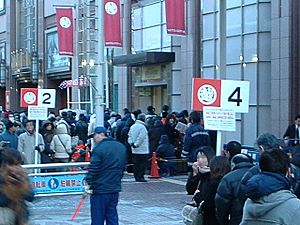 Miyagi Prefecture (宮城県code: ja is deprecated , Miyagi-ken) is a prefecture of Japan. It is part of the Tōhoku region of the island of Honshu. The capital city is Sendai.

Miyagi Prefecture used to be part of Mutsu Province. That province was in the northern part of Honshu. It was made from land taken from the indigenous Emishi. The province became the largest as it expanded to the north. The ancient capital was in modern Miyagi Prefecture.

During the Sengoku period, various clans ruled different parts of the province. Date Masamune was a close ally of the Tokugawa. He established Sendai, which is now the largest town of the Tōhoku region.

In the Meiji period, four new provinces were created from parts of Mutsu: Rikuchū, Rikuzen, Iwaki, and Iwashiro. In 1871, Sendai Prefecture was formed. It was renamed Miyagi prefecture the following year.

There are thirteen cities in Miyagi Prefecture:

These are the towns and villages in each district:

National parks cover about 23% of the total land area of the prefecture. They include:

Farming, fishing and sake brewing are all important in Miyagi. As of March 2011, the prefecture made 4.7% of Japan's rice, 23% of its oysters, and 15.9% of its saury fish. Manufacturing around Sendai is a larger part of the economy. The area produces electronics, appliances, and processed food. 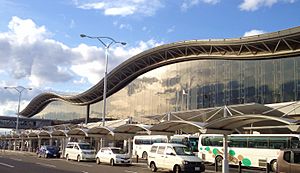 Sendai was the castle town of the daimyo Date Masamune. The remains of Sendai Castle are on a hill above the city.

Miyagi Prefecture has one of Japan's Three Great Views. Matsushima Bay is full of small islands with old pine trees on them. Many visitors come here every year and many artists have painted the islands.

The following are also noted as attractions: 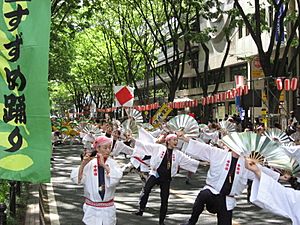 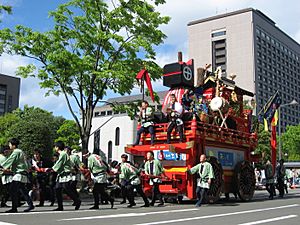 Shigogama jinja is the main Shinto shrine (ichinomiya) in the prefecture.

All content from Kiddle encyclopedia articles (including the article images and facts) can be freely used under Attribution-ShareAlike license, unless stated otherwise. Cite this article:
Miyagi Prefecture Facts for Kids. Kiddle Encyclopedia.