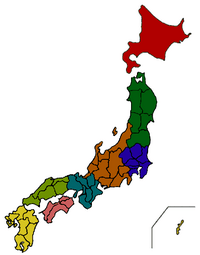 The Regions of Japan are traditional subdivisions of the nation. The regional divisions are used in many ways. These include maps, geography and weather reports. Regions are used as a basic framework for description and comparison.

In Japan, the traditional regions are cultural makers. For example, according to Kunio Kishida in 1940, "The correct tradition of Japanese culture exists today not within the culture of the center, which has developed under the influence of foreign culture; but rather within regional culture."

The names of many businesses incorporate a regional name.

From north to south, the traditional regions include:

All content from Kiddle encyclopedia articles (including the article images and facts) can be freely used under Attribution-ShareAlike license, unless stated otherwise. Cite this article:
List of regions of Japan Facts for Kids. Kiddle Encyclopedia.