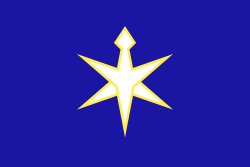 Chiba Prefecture (千葉県code: ja is deprecated , Chiba-ken) is a Japanese prefecture in the Kantō region on the island of Honshu. The capital city is Chiba City.

Chiba is the sixth most populous prefecture, and 27th largest by land area.

Chiba Prefecture is made from the old province of Awa, Kazusa and Shimōsa.

Chiba borders Ibaraki Prefecture to the north at the Tone River, Tokyo and Saitama Prefecture to the west at the Edo River, the Pacific Ocean to the east and Tokyo Bay around its southern boundary. Most of Chiba lies on the hilly Bōsō Peninsula, a rice farming region: the east coast, known as the Ninety-Nine League Plain, is an especially productive area. The most populous zone, in the northwest of the prefecture, is part of the Kantō region that extends into the urban agglomeration of Tokyo and Saitama. The Kuroshio Current flows near Chiba, which keeps it relatively warm in winter and cooler in summer than neighbouring Tokyo.

There are thirty-six cities in Chiba Prefecture:

‡ Scheduled to be dissolved after mergers. 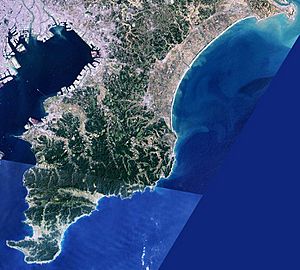 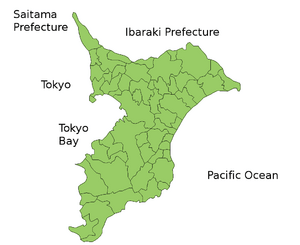 These are the towns and villages in each district:

National Parks are established in about 6% of the total land area of the prefecture.

Chiba is one of Japan's biggest industrial areas. This is because it has a long coastline on Tokyo Bay. Chiba was chosen as the place for a major Kawasaki Steel factory in 1950. The prefectural government started a very big land reclamation program. They filled in the water areas to make big, new waterfront properties for factories, warehouses, and docks. Chemical production, petrochemical refining, and machine production are the three main industries in Chiba. They are 45% of Chiba's exports. In recent years, the government has given more than eighty industrial parks money. This is to bring development further inland. 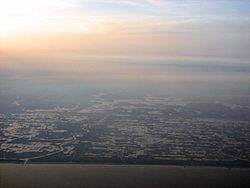 Sunset over Chiba, with Yokoshibahikari and Sosa visible.

These sports teams are based in Chiba.

Most Tokyo-bound visitors going to Tokyo arriving on international flights land in Narita International Airport, which is situated in Narita in the north of the prefecture, and connected to Tokyo by the East Japan Railway's Narita Express and the Keisei Electric Railway's Skyliner.

The Tokyo Disney Resort is in Urayasu near the western border of the prefecture.

The Kamogawa Sea World is a large scale comprehensive marine leisure center/museum equivalent facility located between the Tojo coast and the national highway No. 128 in Kamogawa city.

There are several tourist sites on the Bōsō Peninsula, such as Mount Nokogiri; Kujūkuri Beach; and Onjuku Beach.

Chiba is linked to Tokyo by several railway lines; the main ones are the Keiyo Line and Sobu Line. The Musashino Line connects Chiba to Saitama and northern Tokyo. Southern Chiba is connected to Kanagawa Prefecture by the Tokyo Bay Aqua-Line bridge-tunnel.

Chiba is famous for peanuts. Most of Japan's peanuts are harvested in this prefecture and are also processed into peanut oil.

Awa jinja and Tamasaki jinja are the chief Shinto shrines (ichinomiya) in the prefecture.

All content from Kiddle encyclopedia articles (including the article images and facts) can be freely used under Attribution-ShareAlike license, unless stated otherwise. Cite this article:
Chiba Prefecture Facts for Kids. Kiddle Encyclopedia.