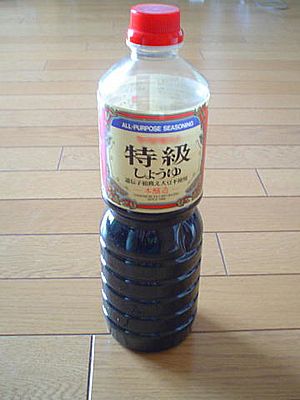 A bottle of Japanese soya sauce

Soy sauce (US) or soya sauce is a fermented sauce made from soy beans (soya beans), roasted grain, water and salt. It is commonly used in Chinese, Japanese and Korean cuisine. It appears in some Western cuisine dishes, especially as an ingredient in Worcestershire sauce. Real soy sauces are fermented with kōji (麹, the mold Aspergillus oryzae or A. sojae) and other related microorganisms. Almost all soy sauce has some alcohol added during bottling. This acts as a preservative to protect it from going bad. For this reason, soy sauce should always be kept in the fridge. It should also not be put in direct light. An opened bottle of soy sauce that has been left unrefrigerated could become slightly bitter.

Although there are many types of soy sauce, all are salty and earthy-tasting brownish liquids used to season food while cooking or at the table. What some westerners can only describe as a flavorful, kind of sweet taste is a distinct basic taste called "umami" by the Japanese and "xian-wei" (鲜味, lit. fresh taste) by the Chinese.

Although this seasoning was first used in China, it is used several cuisines across Asia and is a particularly important flavoring in Japanese cuisine. There are many types of sauce.

All content from Kiddle encyclopedia articles (including the article images and facts) can be freely used under Attribution-ShareAlike license, unless stated otherwise. Cite this article:
Soy sauce Facts for Kids. Kiddle Encyclopedia.