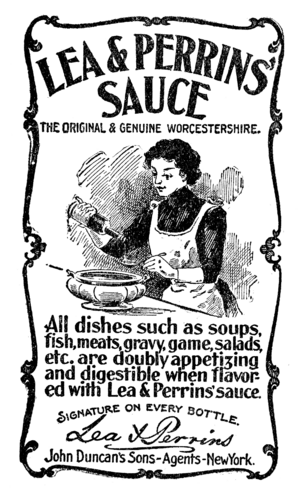 Worcestershire sauce (spoken likeˈwʊstəˌʃɪə or WOOS-ter-sheer) is a widely-usedused fermented sauce. It was first made at 68 Broad Street, Worcester, by the company Lea & Perrins in the 1830s. It was made for selling to people in 1837, and is still the only Worcestershire sauce still to be made in the UK. In 1930 the company was sold to HP Foods and was later sold to the H.J. Heinz Company from Groupe Danone in 2005. The sauce is made ready to sell in the Midlands Road factory in Worcester, which is the home of Lea & Perrins since 16 October 1897.

The sauce is used to make many dishes, both cooked and uncooked, and often with beef; drinks such as the Bloody Mary also use it. Lea & Perrins also makes it in concentrated form that is made ready to sell in other countries.

Worcestershire sauce is called Worcester sauce in South Africa and some parts of the US as; (pronounced /ˈwʊstə/), or spoken like Woo-ster sauce.

The "Worcestershire sauce" is one of many food products that were made because of Britain ruling India.

All content from Kiddle encyclopedia articles (including the article images and facts) can be freely used under Attribution-ShareAlike license, unless stated otherwise. Cite this article:
Worcestershire sauce Facts for Kids. Kiddle Encyclopedia.