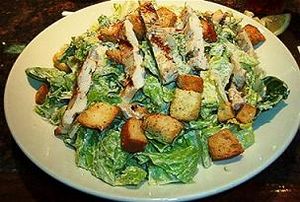 A Caesar salad with chicken.

A Caesar salad is a salad that is made with romaine lettuce and croutons dressed with parmesan cheese, lemon juice, olive oil, egg, Worcestershire sauce, garlic, and black pepper. Some of the most common variations to the salad include: grilled poultry (most often chicken), meat, shellfish, or fish, capers, Romano cheese, anchovies, and bacon.

Caesar dressing can be either creamy, like Ranch dressing, or more oily, like Italian dressing. Its main flavourings are garlic and anchovies.

The salad is said to have been made and called after Caesar Cardini, an Italian immigrant who had restaurants in Mexico and the United States. Cardini was living in San Diego but also working in Tijuana.

The original Caesar salad did not have anchovy. Cardini's daughter said that the original recipe included whole lettuce leaves.

There are risks of infection by salmonella bacteria. Salmonella is sometimes in raw eggs. This is a concern with many similar dressings. They are emulsified with eggs. Later versions of the recipe call for briefly cooked coddled eggs or pasteurized eggs. There are many variations of this salad.

All content from Kiddle encyclopedia articles (including the article images and facts) can be freely used under Attribution-ShareAlike license, unless stated otherwise. Cite this article:
Caesar salad Facts for Kids. Kiddle Encyclopedia.