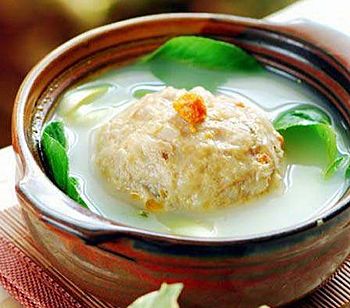 "Lion's head with crab meat" is a traditional meatball soup. 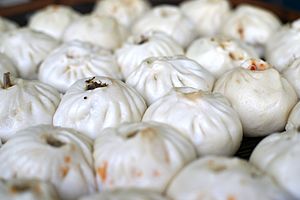 Baozi are a type of Chinese steamed buns

Chinese food is a term that talks about the food that comes from all over China and the cuisine of China. It is an important part of Chinese culture. This food comes from the very different parts of China and also the food made by Overseas Chinese that live in other parts of the world. Because there are a lot of Chinese immigrants around the world, and because China was very important in the past, many food from other countries in Asia have been affected by Chinese food. Important parts of Chinese food are rice, soy sauce, noodles, tea, and tofu. Tools like chopsticks and the wok are also very important.

The four most important types of Chinese food are Sichuan food (Chuan), Shandong food (Lu), Guangdong food (Yue), and Huaiyang food. They each represent the food made in the western, northern, southern, and eastern parts of the country.

All content from Kiddle encyclopedia articles (including the article images and facts) can be freely used under Attribution-ShareAlike license, unless stated otherwise. Cite this article:
Chinese food Facts for Kids. Kiddle Encyclopedia.