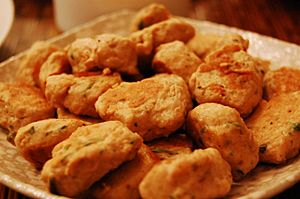 Chicken balls are a food consisting of small, spherical or nearly spherical pieces of chicken. They are prepared and eaten in several different cuisines. 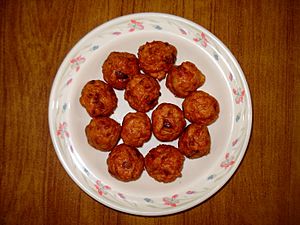 Chicken balls from a Chinese restaurant in Pakistan

Chicken balls (Chinese: 鸡球; pinyin: jī qiú; Cantonese Yale: gai1kau4) are a type of modern Chinese food served in Canada, Ireland, United States, and the United Kingdom as a staple of Chinese take-out. The dish consists of small chunks of fried chicken breast meat covered in a crispy batter coating. They are often served with curry sauce, sweet and sour sauce or plum sauce. These are largely unheard of in China, depending on the recipe and referred name.

In East and Southeast Asian cuisines

Another kind of chicken balls, which are similar to southern Chinese fish balls, may be found in countries in East and Southeast Asia, such as the Philippines and Japan (tsukune).

Chicken balls are also a part of several other culinary traditions, including Italian Jewish cuisine and Islamic cuisine.photo

All content from Kiddle encyclopedia articles (including the article images and facts) can be freely used under Attribution-ShareAlike license, unless stated otherwise. Cite this article:
Chicken balls Facts for Kids. Kiddle Encyclopedia.