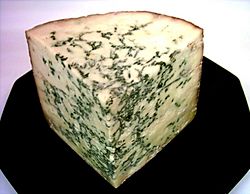 Blue cheese is a type of cheese with a fungus called Penicillium added to it. The fungus makes patches or veins of it look blue. The cheese can be made from cow's milk, sheep's milk, or goat's milk. Types of it include Roquefort cheese, Stilton cheese, and Gorgonzola cheese. These names should only be used for cheeses that are made in certain areas and are protected by the European Union.

100 g of generic blue cheese contains the following nutritional values according to the USDA: 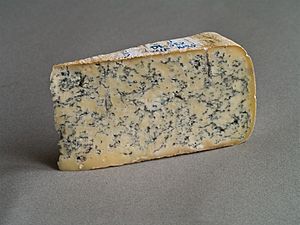 Bleu de Gex, a creamy, semi-soft blue cheese made in the Jura region of France

Similarly to other varieties of cheese, the process of making blue cheese consists of six standard steps, as well as further additions that give this blue-veined cheese its unique properties. The first step is acidification where a starter culture is added to milk in order to change lactose to lactic acid, thus changing the acidity of the milk and turning it from liquid to solid. The next step is coagulation, where rennet, a mixture of rennin and other material found in the stomach lining of a calf is added to solidify the milk further. Following this, thick curds are cut typically with a knife to encourage the release of liquid or whey. The smaller the curds are cut, the thicker and harder the resulting cheese will become. Salt is then added to provide flavor as well as to act as a preservative so the cheese does not spoil. Next, the cheese is given its form and further pressed with weights if necessary to expel any excess liquid. The final step is ripening the cheese by aging it. The temperature and the level of humidity in the room where the cheese is aging is monitored to ensure the cheese does not spoil or lose its optimal flavor and texture.

Blue cheese undergoes the aforementioned steps with an added twist that gives it its unique look of blue streaks found all throughout. The blue veins are a result of adding the molds Penicillium roqueforti and Penicillium glaucum to the cheesemaking process, often introduced after the curds have been ladled into containers in order to be drained and formed into a full wheel of cheese. Although Penicillium roqueforti and Penicillium glaucum are found naturally, cheese producers nowadays use commercially manufactured Penicillium roqueforti culture that have been freeze-dried, a form of dehydration where water is evaporated from the frozen state without the transition through the liquid state, to retain their value and are activated with the addition of water. After the addition of the molds to the cheese, the next significant step is needling, which is when the wheels of blue cheese are pierced to create small openings to allow the air to enter and feed the mold cultures, thus encouraging the formation of blue veins.

The distinctive flavor and aroma of blue cheese arises from methyl ketones (including 2-pentanone, 2-heptanone, and 2-nonanone) which are a metabolic product of Penicillium roqueforti. These compounds are not formed in other types of cheese fermented by bacterial acidification alone.

All content from Kiddle encyclopedia articles (including the article images and facts) can be freely used under Attribution-ShareAlike license, unless stated otherwise. Cite this article:
Blue cheese Facts for Kids. Kiddle Encyclopedia.