For other uses, see Roquefort (disambiguation) 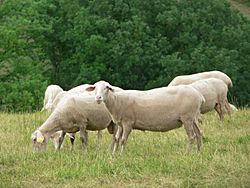 A Lacaune flock in France 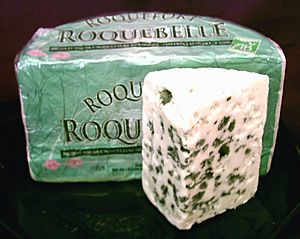 Roquefort is a sheep milk cheese from the south of France, and together with Gorgonzola, Bleu d'Auvergne, Danablu and Stilton is one of the world's best known blue cheeses. Though similar cheeses are produced elsewhere, EU law dictates that only those cheeses aged in the natural Combalou caves of Roquefort-sur-Soulzon may bear the name Roquefort, as it is a recognised geographical indication, or has a protected designation of origin.

The cheese is white, tangy, crumbly and slightly moist, with distinctive veins of blue mold. It has characteristic odor and flavor with a notable taste of butyric acid; the blue veins provide a sharp tang. It has no rind; the exterior is edible and slightly salty.

This cheese breaks into little pieces easily, and it is a little moist. Blue mould is added to Roquefort cheese, which gives it a particular taste. Roquefort is produced in big wheels which weigh around 2.5 kilograms, and which are about 10 cm thick. Roquefort needs to ripen around 5 months. It is best consumed April to October, but of course it is available year round.

In the year 2003, there were seven Roquefort producers. The largest by far is Roquefort Société. Roquefort Papillon is also a well-known brand. The five other producers are Carles, Gabriel Coulet, Fromageries occitanes, Vernières and Le Vieux Berger.

All content from Kiddle encyclopedia articles (including the article images and facts) can be freely used under Attribution-ShareAlike license, unless stated otherwise. Cite this article:
Roquefort cheese Facts for Kids. Kiddle Encyclopedia.