Aveyron (Occitan: Avairon) is a French department found in the northeast of the Occitanie region of southern France and named after the Aveyron river. Its prefecture is Rodez.

Aveyron is one of the 83 French departments made during the French revolution, on 4 March 1790. It was created with most of the territory of the old province of Rouergue; in fact, the present flag of the department was the flag of Rouergue.

The first known historical inhabitants of the region were the Rutenii tribe but, before them, the area was inhabited by people that built many prehistoric ruins including over 1,000 dolmens - more than any other department in France.

In 1808, the old canton of Saint-Antonin-Noble-Val was transferred from Aveyron to the new department of Tarn-et-Garonne. 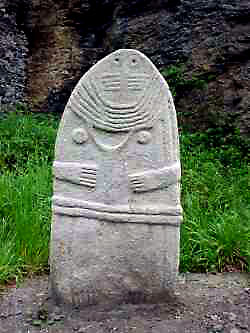 The territory is crossed, among others, by the rivers Lot and Tarn, both tributaries of the Garonne river. The Aveyron river, which gives its name to the department, is a tributary of the Tarn river.

The main rivers of Aveyron are the Lot in the north, the Aveyron in the centre and the Tarn in the south, all tributaries of the Garonne. They flow from east to west, following the general slope of the department, and divide it into four zones.

The climate of the Aveyron is subtropical with dry-summer, Csb (Mediterranean Climate) in the Köppen climate classification.

Aveyron is part of the region of Occitanie. The department is managed by the Departamental Council of the Aveyron in Rodez.

There are 3 arrondissements (districts), 23 cantons and 286 communes (municipalities) in Aveyron.

The following is a list of the 23 cantons of the Aveyron department (with their INSEE codes), in France, following the French canton reorganisation which came into effect in March 2015:

The inhabitants of Aveyron are known, in French, as Aveyronnais (women: Aveyronnaises).

The city with more people living in it is the capital, Rodez (24,088). The subprefectures of Millau and Villefranche-de-Rouergue have, respectively, 22,064 and 11,822 inhabitants. 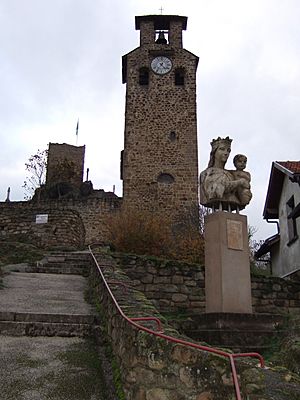 All content from Kiddle encyclopedia articles (including the article images and facts) can be freely used under Attribution-ShareAlike license, unless stated otherwise. Cite this article:
Aveyron Facts for Kids. Kiddle Encyclopedia.