The name Occitania (French: Occitanie) was approved as the new name of the region on 28 September 2016, effective 30 September 2016.

The new Occitania Region should not be confused with the wider cultural entity of Occitania, of which the new administrative region is part. 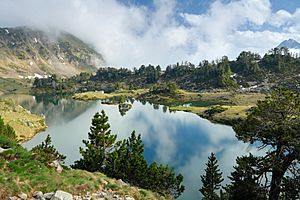 The Occitanie region is the third largest region of France, after Nouvelle-Aquitaine and French Guiana, and the second of Metropolitan France with an area of 72,723.5 km2 (28,079 sq mi). It is in southern France (the Midi) and borders to the south with Spain and Andorra; it also borders three French regions: Nouvelle-Aquitaine to the west, Auvergne-Rhône-Alpes to the north, Provence-Alpes-Côte d'Azur to the east. The Mediterranean Sea is to the southeast. 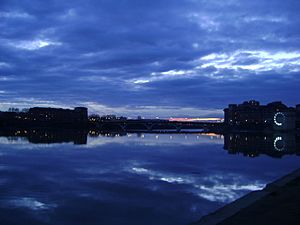 The Garonne river in Toulouse

There are two main drainage basin in the region; some rivers in those basins are:

The highest point of the different departments of the Occitanie region are: 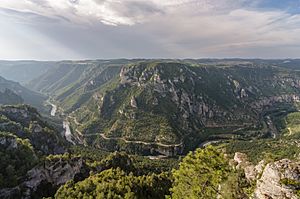 The canyon of the Tarn

The Occitanie region is formed by 13 departments: 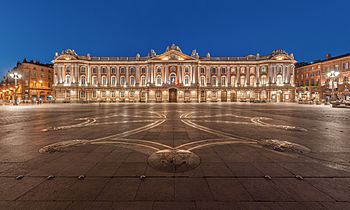 All content from Kiddle encyclopedia articles (including the article images and facts) can be freely used under Attribution-ShareAlike license, unless stated otherwise. Cite this article:
Occitanie Facts for Kids. Kiddle Encyclopedia.