Montauban (Occitan: Montalban) is a commune in the Tarn-et-Garonne department in the Midi-Pyrénées region in southern France. It is the préfecture (capital) of the department.

The town, built mainly with reddish bricks, is on the right bank of the Tarn river at its confluence with the Tescou. It was one of the first bastides in history. 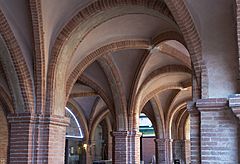 Arcade at Place Nationale in Montauban

Together with Mont-de-Marsan, Montauban is one of the oldest towns with walls (a bastide) in southern France. It was founded in 1144 by Alphonse Jourdain, Count of Toulouse. Most of the inhabitants came from Montauriol, a village which had grown up around the neighbouring monastery of St Théodard.

In the 13th century the town suffered much during the Albigensian Crusade and from the Inquisition, but by 1317 it had recovered sufficiently to be chosen by the Pope John XXII as the head of a diocese of which the basilica of St Théodard became the cathedral.

In 1360, under the Treaty of Brétigny, the town was given to the English; they were expelled by the inhabitants in 1414. In 1560 the bishops became Protestants; ten years later it became one of the four Huguenot strongholds under the Peace of Saint-Germain, and formed a small independent republic.

The climate of Montauban, in the Köppen climate classification, is Cfb - Oceanic climate with template summers.

The inhabitants of Montauban are known, in French, as Montalbanais (women: Montalbanaises).

Montauban is the préfecture of the Tarn-et-Garonne department since 1809. It is also the capital of three cantons, all formed with part of the commune:

Some interesting places in Montauban are:

Montauban is twinned with:

All content from Kiddle encyclopedia articles (including the article images and facts) can be freely used under Attribution-ShareAlike license, unless stated otherwise. Cite this article:
Montauban Facts for Kids. Kiddle Encyclopedia.