Jean-Auguste-Dominique Ingres (29 August 1780 – 14 January 1867) was a French Neoclassical painter. Although he considered himself to be a painter of history in the tradition of Nicolas Poussin and Jacques-Louis David, it is Ingres's portraits, both painted and drawn, that are recognized as his greatest legacy.

Ingres was profoundly influenced by past artistic traditions. His expressive distortions of form and space made him an important precursor of modern art, influencing Picasso, Matisse and other modernists. 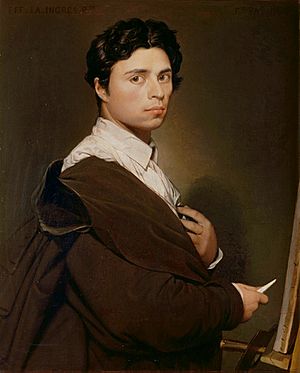 He was born in Montauban, Tarn-et-Garonne, France. His father was a painter, sculptor and violinist, and taught the young Ingres in all these disciplines. The boy's talent for music seemed most promising at first — performance of a concerto of Giovanni Battista Viotti was applauded at the theatre of Toulouse. In 1791 he entered the Royal Academy of Arts in Toulouse where he studied art under Joseph Roques, sculpture under J. Vigan, and landscape painting under Briant.

From an early age he was determined to be a history painter, which was considered the highest level of painting. He did not want to simply make portraits or illustrations of real life like his father; he wanted to represent the heroes of religion, history and mythology, to idealize them and show them in ways that explained their actions, rivaling the best works of literature and philosophy.

Ingres died of pneumonia on 14 January 1867, at the age of eighty-six, in his apartment on the Quai Voltaire in Paris. He is interred in the Père Lachaise Cemetery in Paris with a tomb sculpted by his student Jean-Marie Bonnassieux. The contents of his studio, including a number of major paintings, over 4000 drawings, and his violin, were gifted by the artist to the city museum of Montauban, now known as the Musée Ingres.

All content from Kiddle encyclopedia articles (including the article images and facts) can be freely used under Attribution-ShareAlike license, unless stated otherwise. Cite this article:
Jean Auguste Dominique Ingres Facts for Kids. Kiddle Encyclopedia.