Henri Matisse (Le Cateau-Cambrésis, Nord, 31 December 1869 – 3 November 1954) was a French artist known for his use of colour and his original ideas.

He is mainly known as a painter, but he was also a draughtsman, printmaker and sculptor. Matisse was one of the main artists who helped to create modern art early in the 20th century.

"Matisse created brilliantly coloured canvases structured by colour applied in a variety of brushwork, ranging from thick impasto [thick paint] to flat areas of pure pigment, sometimes accompanied by a sinuous, arabesque-like line. [This was] the first of the avant-garde movements (1905–7), named "Fauvism" by a contemporary art critic, referring to its use of arbitrary combinations of bright colors and energetic brushwork to structure the composition".

Although he was initially called a Fauve (wild beast), he painted many traditional themes. He painted from life, and his work includes many portraits and other figurative subjects. His mastery of the expressive language of form and colour, in work spanning over a half-century, won him recognition as a leading figure in modern art. 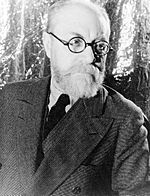 A portrait of Henri Matisse

Matisse and Renoir were friends with a common bond; they loved color, beauty, and painting. He also had the influence of Edouard Manet, Paul Gauguin, Paul Cezanne and Vincent Van Gogh.

Around April 1906, he met Pablo Picasso, who was 11 years younger than Matisse. The two became lifelong friends as well as rivals and are often compared.

Matisse was an influential figure of the 20th century, he had a great impact on future movements of the time, and on artists like Jackson Pollock and Georgia O'Keeffe.

Matisse made copies of many paintings in the Louvre to learn painting. He also experimented with other techniques like Cubism and Pointillism. In his old age, he worked with painted paper and scissors, making collages.

Matisse died of a heart attack in Nice, Alpes-Maritimes.

All content from Kiddle encyclopedia articles (including the article images and facts) can be freely used under Attribution-ShareAlike license, unless stated otherwise. Cite this article:
Henri Matisse Facts for Kids. Kiddle Encyclopedia.