Algeria on a world map

Algeria, officially the People's Democratic Republic of Algeria, is a former French colony and the largest country in Africa. It is part of the Maghreb region of Northwest Africa. Algiers is the capital. It is bordered by the Mediterranean Sea in the north, Tunisia in the northeast, Libya in the east, Niger in the southeast, Mauritania and Mali in the southwest, Western Sahara in the west and Morocco in the northwest. It is also the largest country in the Arab world.

People have lived in Algeria for thousands of years, which can be seen in the cave paintings at Tassili National Park that date to around 7000BC. By 600 BC, Phoenicians were in Hippo Regius (now called Annaba), Rusicade (now Skikda), and Tipasa in the central coastal part of the country. The Romans would annex (take over) the region by the conclusion of the Punic Wars in 146BC, with what is now modern day Algeria staying in Roman hands till the fall of the Roman Empire in the 5th century and the region being taken over by the Germanic Vandals.

Algeria would become part of the islamic world when the first Muslim Arabs came to Algeria in the mid-7th century, resulting in many people converting to the new religion of islam. In the 11th century, the Arab tribes of Banu Hilal and Banu Sulaym were living between Tunisia and eastern Algeria (Constantois). The famous mathematician, Fibonacci (1170—1250) lived in Algeria as a teenager. This is where he learned the Hindu–Arabic numeral system. Algeria was made part of the Ottoman Empire in 1517. Enslavement of black people was practiced there as it was throughout the empire.

In the 1500s and 1700s, the Spanish Empire ruled a lot of Algeria. France colonized Algeria starting in 1830. In 1954, the National Liberation Front (Front de Libération Nationale or FLN) wanted freedom from France. They fought a war. It became independent from France in July 5, 1962.

In 1963 Ahmed Ben Bella became the first President of Algeria.

A large part of southern Algeria is the Sahara Desert. The Aures and Nememcha mountain ranges are in the north. The highest point is Mount Tahat (3,003 m).

The official languages of the country are Arabic as a first language and Berber as a second language. Many people speak French, too.

Algeria's population is about 45 million people. There are over 40 cities with more than 100,000 people.

The Parliament of Algeria is made up of two chambers:

A proportional representation of Algeria exports, 2019

Algeria's currency is the dinar (DZD). The economy remains dominated by the state, a legacy of the country's socialist post-independence development model. In recent years, the Algerian government has halted the privatization of state-owned industries and imposed restrictions on imports and foreign involvement in its economy. These restrictions are just starting to be lifted off recently although questions about Algeria's slowly-diversifying economy remain.

Algeria, whose economy is reliant on petroleum, has been an OPEC member since 1969. Its crude oil production stands at around 1.1 million barrels/day, but it is also a major gas producer and exporter, with important links to Europe. Hydrocarbons have long been the backbone of the economy, accounting for roughly 60% of budget revenues, 30% of GDP, and over 95% of export earnings. Algeria has the 10th-largest reserves of natural gas in the world and is the sixth-largest gas exporter. The U.S. Energy Information Administration reported that in 2005, Algeria had 4.5 trillion cubic metres (160×10^12 cu ft) of proven natural-gas reserves. It also ranks 16th in oil reserves.

Non-hydrocarbon growth for 2011 was projected at 5%. To cope with social demands, the authorities raised expenditure, especially on basic food support, employment creation, support for SMEs, and higher salaries. High hydrocarbon prices have improved the current account and the already large international reserves position.

Income from oil and gas rose in 2011 as a result of continuing high oil prices, though the trend in production volume is downwards. Production from the oil and gas sector in terms of volume, continues to decline, dropping from 43.2 million tonnes to 32 million tonnes between 2007 and 2011. Nevertheless, the sector accounted for 98% of the total volume of exports in 2011, against 48% in 1962, and 70% of budgetary receipts, or US$71.4 billion.

The Algerian national oil company is Sonatrach, which plays a key role in all aspects of the oil and natural gas sectors in Algeria. All foreign operators must work in partnership with Sonatrach, which usually has majority ownership in production-sharing agreements.

The development of the tourism sector in Algeria had previously been hampered by a lack of facilities, but since 2004 a broad tourism development strategy has been implemented resulting in many hotels of a high modern standard being built.

There are several UNESCO World Heritage Sites in Algeria including Al Qal'a of Beni Hammad, the first capital of the Hammadid empire; Tipasa, a Phoenician and later Roman town; and Djémila and Timgad, both Roman ruins; M'Zab Valley, a limestone valley containing a large urbanized oasis; and the Casbah of Algiers, an important citadel. The only natural World Heritage Site is the Tassili n'Ajjer, a mountain range.

The Algerian road network is the densest in Africa; its length is estimated at 180,000 km (110,000 mi) of highways, with more than 3,756 structures and a paving rate of 85%. This network will be complemented by the East-West Highway, a major infrastructure project currently under construction. It is a 3-way, 1,216-kilometre-long (756 mi) highway, linking Annaba in the extreme east to the Tlemcen in the far west. Algeria is also crossed by the Trans-Sahara Highway, which is now completely paved. This road is supported by the Algerian government to increase trade between the six countries crossed: Algeria, Mali, Niger, Nigeria, Chad, and Tunisia. 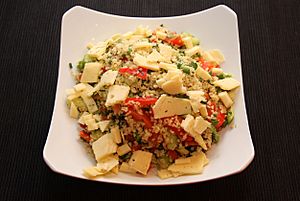 Algerian cuisine is rich and diverse. The country was considered as the "granary of Rome". It offers a component of dishes and varied dishes, depending on the region and according to the seasons. The cuisine uses cereals as the main products, since they are always produced with abundance in the country. There is not a dish where cereals are not present.

Algerian cuisine varies from one region to another, according to seasonal vegetables. It can be prepared using meat, fish and vegetables. Among the dishes known, couscous, chorba, rechta, chakhchoukha, berkoukes, shakshouka, mthewem, chtitha, mderbel, dolma, brik or bourek, garantita, lham'hlou, etc. Merguez sausage is widely used in Algeria, but it differs, depending on the region and on the added spices.

All content from Kiddle encyclopedia articles (including the article images and facts) can be freely used under Attribution-ShareAlike license, unless stated otherwise. Cite this article:
Algeria Facts for Kids. Kiddle Encyclopedia.