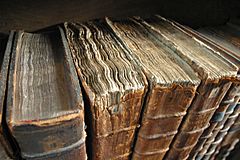 Old book bindings at a library

Literature is a group of works of art made up of words. Most are written, but some are passed on by word of mouth. Literature usually means works of poetry and prose that are especially well written. There are many different kinds of literature, such as poetry, plays, or novels. They can also be put into groups through their language, historical period, origin, genre, and subject. The word literature comes from the Latin word "learning, writing, grammar".

Most of the earliest works were epic poems. Epic poems are long stories or myths about adventures. Ramayana and Mahabharta, two Indian epics, are still read today. Odyssey and Iliad are two famous Greek poems by Homer. They were passed down through speaking and written down around the 8th century BC.

Literature can also mean imaginative or creative writing, which is looked at for its artistic value. 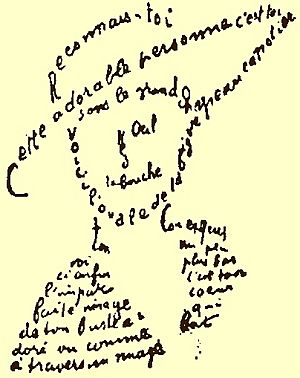 A calligram by Guillaume Apollinaire. These are a type of poem in which the written words are arranged in such a way to produce a visual image.

Poetry is a form of literary art which uses aesthetic and rhythmic qualities of language to evoke meanings in addition to, or in place of, prosaic ostensible meaning. Poetry has traditionally been distinguished from prose by its being set in verse; prose is cast in sentences, poetry in lines; the syntax of prose is dictated by meaning, whereas that of poetry is held across meter or the visual aspects of the poem. Prior to the 19th century, poetry was commonly understood to be something set in metrical lines; accordingly, in 1658 a definition of poetry is "any kind of subject consisting of Rhythm or Verses". Possibly as a result of Aristotle's influence (his Poetics), "poetry" before the 19th century was usually less a technical designation for verse than a normative category of fictive or rhetorical art. As a form it may pre-date literacy, with the earliest works being composed within and sustained by an oral tradition; hence it constitutes the earliest example of literature. 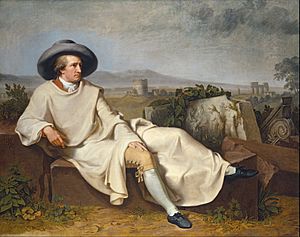 Prose is a form of language that possesses ordinary syntax and natural speech rather than rhythmic structure; in which regard, along with its measurement in sentences rather than lines, it differs from poetry. On the historical development of prose, Richard Graff notes that "[In the case of Ancient Greece] recent scholarship has emphasized the fact that formal prose was a comparatively late development, an "invention" properly associated with the classical period".

Drama is literature intended for performance. The form is often combined with music and dance, as in opera and musical theater. A play is a subset of this form, referring to the written dramatic work of a playwright that is intended for performance in a theater; it comprises chiefly dialogue between characters, and usually aims at dramatic or theatrical performance rather than at reading. A closet drama, by contrast, refers to a play written to be read rather than to be performed; hence, it is intended that the meaning of such a work can be realized fully on the page. Nearly all drama took verse form until comparatively recently.

Greek drama exemplifies the earliest form of drama of which we have substantial knowledge. Tragedy, as a dramatic genre, developed as a performance associated with religious and civic festivals, typically enacting or developing upon well-known historical or mythological themes. Tragedies generally presented very serious themes. With the advent of newer technologies, scripts written for non-stage media have been added to this form. War of the Worlds (radio) in 1938 saw the advent of literature written for radio broadcast, and many works of Drama have been adapted for film or television. Conversely, television, film, and radio literature have been adapted to printed or electronic media.

All content from Kiddle encyclopedia articles (including the article images and facts) can be freely used under Attribution-ShareAlike license, unless stated otherwise. Cite this article:
Literature Facts for Kids. Kiddle Encyclopedia.