Kyrgyzstan, officially the Kyrgyz Republic, and also known as Kirghizia, is a country in Central Asia. Kyrgyzstan is a landlocked country with mountainous terrain. It is bordered by Kazakhstan to the north, Uzbekistan to the west and southwest, Tajikistan to the southwest and China to the east. It is farther from the ocean than any other country in the world.

Its capital and largest city is Bishkek.

Kyrgyzstan's recorded history spans over 2,000 years, encompassing a variety of cultures and empires. Although geographically isolated by its highly mountainous terrain, which has helped preserve its ancient culture, Kyrgyzstan has been at the crossroads of several great civilizations as part of the Silk Road and other commercial and cultural routes.

Though long inhabited by a succession of independent tribes and clans, Kyrgyzstan has periodically fallen under foreign domination and attained sovereignty as a nation-state only after the breakup of the Soviet Union in 1991.

Since independence, the sovereign state has officially been a unitary parliamentary republic, although it continues to endure ethnic conflicts, revolts, economic troubles, transitional governments and political conflict.

Kyrgyzstan is a member of the Commonwealth of Independent States, the Eurasian Economic Union, the Collective Security Treaty Organization, the Shanghai Cooperation Organisation, the Organisation of Islamic Cooperation, the Turkic Council, the Türksoy community and the United Nations.

Ethnic Kyrgyz make up the majority of the country's six million people, followed by significant minorities of Uzbeks and Russians.

Kyrgyz is closely related to other Turkic languages, although Russian remains widely spoken and is an official language, a legacy of a century of Russification. The majority of the population are non-denominational Muslims.

In addition to its Turkic origins, Kyrgyz culture bears elements of Persian, Mongolian, and Russian influence. 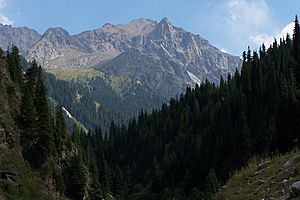 Bishkek, the capital city, is in the north. It is largest city in Kyrgyzstan. The second largest is the ancient town of Osh. 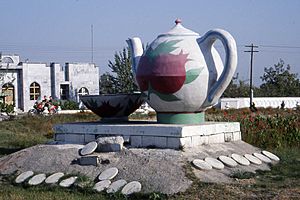 The climate varies regionally. The low-lying Fergana Valley in the southwest is subtropical and extremely hot in summer, with temperatures reaching 40 °C (104 °F) The northern foothills are temperate and the Tian Shan varies from dry continental to polar climate, depending on elevation.

In the coldest areas temperatures are sub-zero for around 40 days in winter, and even some desert areas experience constant snowfall in this period. In the lowlands the temperature ranges from around -−6 °C (21 °F) in January to 24 °C (75 °F) in July. 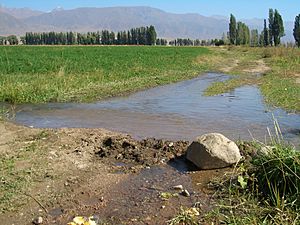 Agriculture is an important part of the economy in Kyrgyzstan. Much farming is being done by hand and by horse. Main crops include wheat, sugar beets, potatoes, cotton, tobacco, vegetables, and fruit. 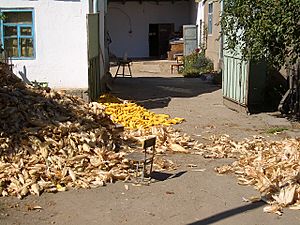 Kyrgyzstan is rich in mineral resources. It has small petroleum and natural gas reserves. Among its mineral reserves are solid amount of coal, gold, uranium, antimony. Metallurgy is an important industry.

Its trade partners are Germany, Russia, China, Kazakhstan, and Uzbekistan. 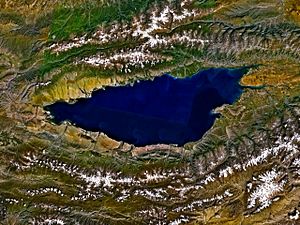 One of the most popular tourist destination points in Kyrgyzstan is the lake Issyk-Kul. Numerous hotels, resorts and boarding houses are located along its northern shore.

The most popular beach zones are in the city of Cholpon-Ata and the settlements nearby, such as Kara-Oi (Dolinka), Bosteri and Korumdy. The number of tourists visiting the lake was more than a million a year in 2006 and 2007. However, due to the economic and political instability in the region, the number has declined in recent years. 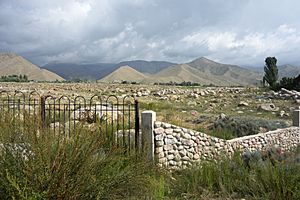 Some of the most popular locations for camping are southern Osh, the area between Naryn City and the Torugart pass, and the mountains and glaciers surrounding Karakol in Issyk-Kul. Local guides and porters can be hired from many tour companies in Bishkek and in the regional capitals.

Skiing is still in its infancy as a tourism industry. The ski base of Toguz Bulak is 45 km (28 mi) from Bishkek, on the way to Issyk Ata valley. In the Karakol Valley National Park, outside Karakol.

All content from Kiddle encyclopedia articles (including the article images and facts) can be freely used under Attribution-ShareAlike license, unless stated otherwise. Cite this article:
Kyrgyzstan Facts for Kids. Kiddle Encyclopedia.