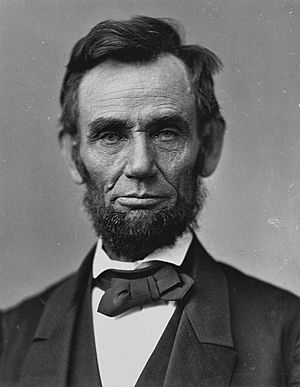 Abraham Lincoln the 16th President of the United States known for abolishing slavery.

A president is the leader of a country or a company or other group. A president is usually elected by the people in that group. Voting is one way to elect a president.

Power of a President

Most countries that have a King or Queen as their monarch have no president.

So despite having a large nuclear arsenal, the American president can not carry out policy and introduce legislation as freely as the British prime minister.

All content from Kiddle encyclopedia articles (including the article images and facts) can be freely used under Attribution-ShareAlike license, unless stated otherwise. Cite this article:
President Facts for Kids. Kiddle Encyclopedia.