Carter was born in Plains, Georgia. He was a state senator and later the governor of Georgia. His family owned a peanut plantation. The Secret Service called him Peanut One.

He won a primary against Ted Kennedy for the Democratic Party nomination in the He lost the 1980 election to Ronald Reagan, the Republican candidate. After Carter's term in office ended on January 20, 1981, the 52 U.S. hostages held at the U.S. embassy in Iran were released. The 444-day Iran hostage crisis was ended.

After leaving office, Carter and his wife Rosalynn founded the Carter Center in 1982. It is a not-for-profit organization that works to advance human rights. He has traveled widely to conduct peace negotiations, and observe elections. He works for disease prevention and disease eradication in developing countries.

James Earl Carter was born in the Wise Sanitarium in Plains, Georgia on October 1, 1924. His parents are Lillian Gordy Carter and James Earl Carter, Sr. He is the eldest of four children. Carter's father was a business owner in the community. His mother was a registered nurse. Carter was the first President of the United States to be born in a hospital.

His half-second cousin is Berry Gordy through his mother Lillian Gordy. He is a cousin of June Carter Cash.

Carter was a gifted student from an early age. He always love to read. As a youngster, he was a star in basketball. In high school, he was in the Future Farmers of America. Carter was the Plains FFA Chapter Secretary.

After high school, Carter enrolled at Georgia Southwestern College, in Americus. Later, he applied to the United States Naval Academy. He took extra mathematics courses at Georgia Tech. He was admitted to the Academy in 1943. Carter graduated 59th out of 820 midshipmen at the Naval Academy. He earned a Bachelor of Science degree.

He married Rosalynn Smith in 1946. They have four children: Jack, Chip, Jeff, and Amy.

Carter served on ships and on submarines in the Atlantic and Pacific fleets. He was a junior officer when he completed qualification for command of a submarine. He applied for the US Navy's nuclear submarine program run by Captain Hyman G. Rickover. Rickover's demands on his men and machines were well known. Carter later said that, next to his parents, Rickover had the greatest influence on him.

He had planned to make it his service to the Navy as his career. His ultimate goal was to become Chief of Naval Operations. Carter felt the best route for promotion was with submarine duty. He felt that nuclear power would be used more and more in submarines. Carter was based in Schenectady, New York. There he worked on developing training materials for the nuclear propulsion system for the prototype of a new submarine.

His father James Earl Carter, Sr., died in July 1953. Carter was needed to run the family business. He resigned his commission, and was discharged from the Navy on October 9, 1953.

As Governor of Georgia

Carter was sworn in as the 76th Governor of Georgia on January 12, 1971. He held this job for one term, until January 14, 1975. At the time, governors of Georgia were not allowed to succeed themselves. His predecessor as governor, Lester Maddox, became the Lieutenant Governor. Carter and Maddox found little common ground during their four years of service. They often publicly disagreed with each other. In Georgia, the Governor and Lieutenant Governor were not elected as a team.

When Carter's name was on the ballot in the Democratic Party primaries in 1976, he was considered to have little chance against nationally well known politicians. His name recognition was about two percent.

As late as January 26, 1976, Carter was the first choice of only four percent of Democratic voters, according to a Gallup poll. He chose United States Senator from Minnesota Walter Mondale as his running mate. He beat Republican Gerald Ford. He received 297 electoral votes. Carter became the first person from the Deep South since Zachary Taylor was elected in 1848 to win the presidency.

The Inauguration of Jimmy Carter, 1977

Carter tried to help with the problem between Israel and Palestine. He also tried to reach an agreement with the USSR about nuclear weapons. This did not work because he was not prepared to compromise.

He did help Egypt and Israel sign the peace treaty. They have not gone to war since. He was followed as President by Ronald Reagan. Carter often visits foreign countries as an independent observer of elections.

While Carter was President, some people took over the U.S. Embassy in Iran. They kept Americans in the embassy as hostages. The hostages were not released until the last day Carter was president. They were held for 444 days. 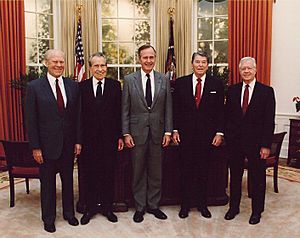 Carter also had to deal with many problems in the United States. During his presidency, the nation had an energy and economic crisis. He suggested that the country use less resources like water and electricity in order to protect the environment.

There was a United States boycott of the 1980 Summer Olympics that took place in Moscow, USSR. This was in protest of the Soviet Union's invasion of Afghanistan during the time.

Carter in the Oval Office at the White House 2009

When his presidency was over, Carter worked with groups such as Habitat for Humanity to build houses in poor areas. He also has worked for peace in the Middle East. He won the Nobel Peace Prize in 2002. He has written many books.

On September 8, 2012, Carter surpassed Herbert Hoover as the longest retirement of any president after leaving office. His grandson, Jason Carter became a member of the Georgia State Senate in 2010 and is running for Governor of Georgia in 2014.

Carter in the Lyndon B. Johnson Presidential library in 2011

Carter was beaten by Ronald Reagan in the 1980 election

On August 12, 2015, Carter announced he had cancer originating in the liver. He had undergone treatment and elective surgery earlier in the month at Emory Healthcare in Georgia to remove what was described as "a small mass." His spokeswoman originally stated that the prognosis for recovery from the surgery was "excellent".

However, Carter subsequently disclosed that he has liver cancer which has spread to other areas of his body. On August 20, he disclosed that melanoma had been found in his brain and liver, and that he had begun treatment with the immunotherapy drug Keytruda and was about to start radiation therapy. On 6 December, 2015 it was announced that his cancer 'had gone'.

All content from Kiddle encyclopedia articles (including the article images and facts) can be freely used under Attribution-ShareAlike license, unless stated otherwise. Cite this article:
Jimmy Carter Facts for Kids. Kiddle Encyclopedia.