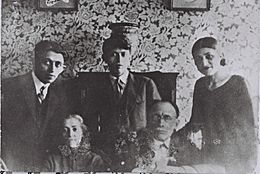 In 1941 he joined the Free Polish army. This is how he arrived in Mandatory Palestine in 1942.

In 1942, Begin joined the Irgun, a Zionist-Jewish paramilitary organisation, which was labelled as a terrorist organization in the 1940s. From 1943 to 1948 he was commander of the Irgun.

He was the founder of the Israeli political party Likud. He was the sixth Prime Minister of Israel.

Begin’s most significant acts as Prime Minister include officially declaring Jerusalem the capital of Israel, imposing Israeli law on the Golan Heights destroying Saddam Hussein's nuclear reactor in Iraq controversially leading Israel through the early stages of the 1982 Lebanon War and most famously signing the Egypt–Israel Peace Treaty. For that treaty, Begin and Anwar Sadat shared the Nobel Peace Prize.

Begin resigned as Prime Minister in October 1983. He died on 9 March 1992 after a heart attack. He was buried on the Mount of Olives.

All content from Kiddle encyclopedia articles (including the article images and facts) can be freely used under Attribution-ShareAlike license, unless stated otherwise. Cite this article:
Menachem Begin Facts for Kids. Kiddle Encyclopedia.