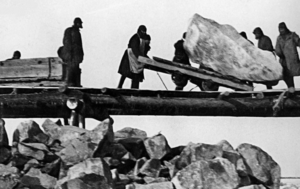 Gulag describes a vast network of slave labor camps operated by the Soviet Union from the 1930s to the 1950s. Ever since the Soviet Union was founded in 1917, it imprisoned people who spoke out against it. This was in fact no different from what Imperial Russia did in previous decades, with its katorga camps. But the Soviet Union camp system eventually grew to be one of the biggest prison systems in existence.

During the 1920s, the Soviet Union imprisoned more and more people that disagreed with it. Its leaders believed it was better to put these people to work and make their labor and goods part of the national economy. In fact, two out of every hundred workers in the Soviet Union were gulag prisoners.

The Gulag system was officially created in 1930. During the 1930s there was a lot of fear of the Soviet government. Police officials were encouraged to round up and imprison many citizens for the most trivial offenses, even if they were innocent, and this caused the Gulag system to swell. By 1936, there were 5,000,000 prisoners in the gulags.

Even though the Gulag is often associated with Siberia, labor camps were located across the Soviet Union. Siberian camps greatly simplified the problem of keeping prisoners from running away, though it was harder to feed these camps and move goods in and out because the camps were so far away.

The Gulag system died during the 1950s after the death of Joseph Stalin, and many people were released starting in 1954. The Gulag program was ended with a government decree in 1960.

All content from Kiddle encyclopedia articles (including the article images and facts) can be freely used under Attribution-ShareAlike license, unless stated otherwise. Cite this article:
Gulag Facts for Kids. Kiddle Encyclopedia.