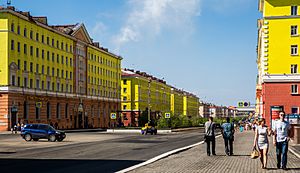 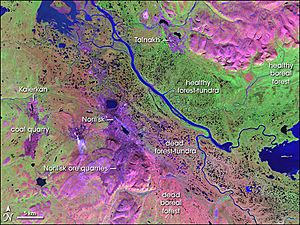 Norilsk is a city in Siberia, with almost 180,000 people. It lies about 300 kilometres (190 mi) north of the arctic circle, and over 1,500 kilometres (930 mi) north of Krasnoyarsk. There are many ore deposits in the region, especially nickel and copper. Mining ore is always linked to heavy pollution of the environment. Norilsk was founded in 1935 as a site of industry, to be able to mine the ore. In 1939, the decision was taken to also build a city. Norilsk got the statute of a city in 1953.

Norilsk is the northernmost city with more than 100.000 inhabitants. It is the second largest city within the arctic circle, only Murmansk is larger. Norilsk and Yakutsk are the only large cities built in the continuous permafrost zone. This means that even in summer, the ground remains frozen.

The nickel deposits of Norilsk-Talnakh are the largest-known nickel-copper-palladium deposits in the world. The smelting of the nickel ore is directly responsible for severe pollution, which generally comes in the form of acid rain and smog. By some estimates, one percent of global sulfur dioxide emission comes from Norilsk's nickel mines.

Norilsk is a closed city. This means that a special permit is needed to be able to travel to Norilsk. This permit is issued both by the Russian government, and the local mining comany. Foreigners usually do not get this permit. 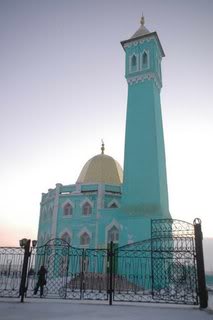 Norilsk can only be reached by airplane, or by boat.There is a railway line, which connects the city to Dudinka, on the river Yenisei. The airport lies about 34 kilometres (21 mi) west of the ciry. Dudinka is about 90 kilometres (56 mi) to the west. It is a large port on the river Yenisei. While at first, there was only the railway, a road to Dudinka has been built. The raiway now only handles freight. 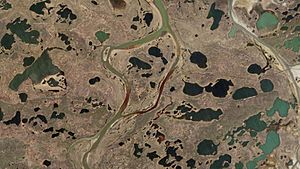 On 29 May 2020 a fuel reservoir collapsed, flooding the nearby Ambarnaya River with 20,000 tonnes of diesel fuel. The reservoir was the property of the local mining company, a Nornickel subsidiary, NTEK. Russian president Vladimir Putin declared a state of emergency. The fuel was a reserve used as a backup for the main gas supply to a power plant. The storage tank was built on permafrost. According to a statement by the company, the permafrost could possibly have melted and become unstable because of climate change. An area of 350 square kilometres (135 square miles) has been contaminated. It will be difficult to clean this because there are no roads and the river is too shallow for boats and barges. Oleg Mitvol estimates that the clean-up will cost about 100 billion rubles (1.5 billion US$) and take 5–10 years.

All content from Kiddle encyclopedia articles (including the article images and facts) can be freely used under Attribution-ShareAlike license, unless stated otherwise. Cite this article:
Norilsk Facts for Kids. Kiddle Encyclopedia.