The subjects of the Russian Federation (Russian: Субъекты Российской Федерации Subekty Rossiyskoy Federatsii) are the main administrative divisions in Russia. Since 18 March 2014, Russia is made up of 85 federal subjects. They are grouped into eight Federal Districts.

The federal subjects are divided into oblasts, republics, krais, autonomous okrugs, federal cities and autonomous oblasts. Republics are generally independent, each having its own constitution and legislature. They are meant to be home to a certain ethnic minority. The republics can also set their own official language. 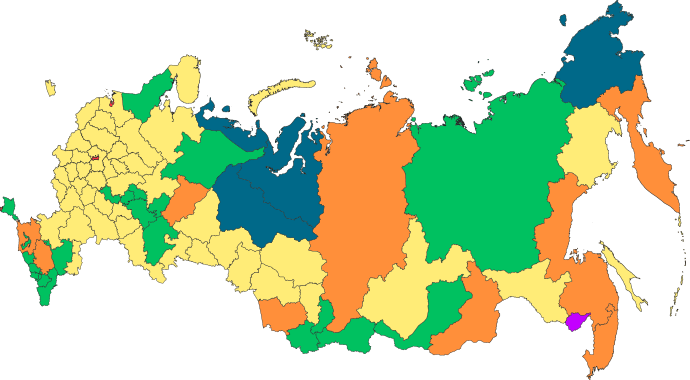 Each federal subject belongs to one of the following types:

a. The largest city is also listed when it is different from the capital/administrative center.

b. According to Article 13 of the Charter of Leningrad Oblast, the governing bodies of the oblast are located in the city of St. Petersburg. However, St. Petersburg is not officially named to be the administrative center of the oblast.

d. Not recognized internationally as a part of Russia.

e. In February 2000, the former code of 20 for the Chechen Republic was cancelled and replaced with code 95. License plate production was suspended due to the Chechen Wars, causing numerous issues, which in turn forced the region to use a new code.

All content from Kiddle encyclopedia articles (including the article images and facts) can be freely used under Attribution-ShareAlike license, unless stated otherwise. Cite this article:
Federal subjects of Russia Facts for Kids. Kiddle Encyclopedia.