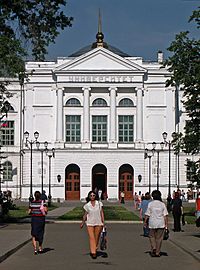 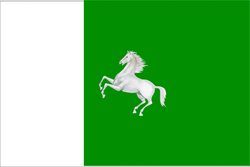 Tomsk (Russian: Томск) is a Russian city, the administrative center of Tomsk Oblast. One of the largest cities in Siberia. Population 575 352 (2019).

Established under a decree from Tsar Boris Godunov in 1604.

In 1804, the government selected Tomsk to become the center for a new governorate which would include the modern cities of Novosibirsk, Kemerovo, Altai, Krasnoyarsk and eastern Kazakhstan.

Tomsk Polytechnic University is the first (founded in 1896 and opened in 1900) technical university in Siberia.

Siberian Medical University is one of the oldest (founded in 1930) and highest rated medical schools in Russia.

The annual average temperature is 0.9 °C. Winters are severe and lengthy (from the end of October to the beginning of April), and the lowest recorded temperature was −55 °C in January 1931.

All content from Kiddle encyclopedia articles (including the article images and facts) can be freely used under Attribution-ShareAlike license, unless stated otherwise. Cite this article:
Tomsk Facts for Kids. Kiddle Encyclopedia.