Monroe is a city in the U.S. state of Michigan located on Lake Erie. The population was 20,733 at the 2010 census. It is the largest city and county seat of Monroe County. The city is bordered on the south by Monroe Charter Township, but both are politically independent. The city is located approximately 14 mi (23 km) north of Toledo, Ohio and 25 mi (40 km) south of Detroit. The United States Census Bureau lists Monroe as the core city in the Monroe Metropolitan Area, which had a population of 152,021 in 2010. Monroe is officially part of the Detroit-Ann Arbor-Flint CSA. The city is sometimes unofficially included as a northerly extension of the Toledo Metropolitan Area.

Settled by European Americans in 1784 shortly after the American Revolutionary War, Monroe was platted in 1817. It was named after President James Monroe. Today, the city is committed to historic preservation of resources; it is remembered for the Battle of Frenchtown during the War of 1812, as well as being the childhood residence of George Armstrong Custer and other members of his family, including his brother Boston Custer and wife Elizabeth Bacon. The city has numerous historic museums and landmarks.

Monroe is the home of the La-Z-Boy world headquarters. The population has declined slightly since its peak in 1970.

Long occupied by varying cultures of indigenous peoples, the area around the River Raisin was settled by the historic Potawatomi hundreds of years before the French reached the area in the late seventeenth century. Robert de LaSalle claimed the area for New France after his 1679 expedition on the Griffon.

In 1784, after the American Revolutionary War, Francis Navarre of Canada was given a portion of land south of the River Raisin by the Potawatomi. Colonists settled Frenchtown shortly thereafter as the third European community in the state. Around the same time, the Sandy Creek Settlement was established just north of Frenchtown by French-Canadian Joseph Porlier Benec. 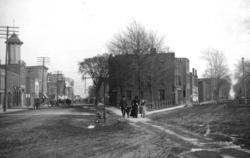 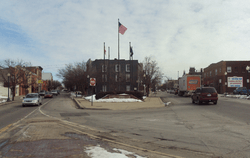 Because of its proximity to Detroit, the area was of strategic importance during the War of 1812 between the United States and Great Britain, especially after Detroit surrendered to the British in August 1812. American forces en route to retake Detroit had camped in the area of the River Raisin in the winter of 1812-13. A force of 200 Native Americans and 63 Canadian militia were forced to retreat north away from the River Raisin by 600 Kentucky militiamen and 100 French, under the command of James Winchester, on January 18, 1813. This skirmish was later dubbed the 'First Battle of the River Raisin'.

But, on January 22, a force of 800 Native Americans and 597 British, under Henry Procter (British Army officer), surprised the force of 1,000 Americans and captured Frenchtown. Many of the American militia were inexperienced, ill-trained, and badly equipped. They suffered 397 killed and 547 captured. The British and their allies suffered slight losses.

When the British departed with their captives to Detroit, they left those Americans too wounded to walk in the homes of Frenchtown inhabitants under the guard of a small British detachment and their Native American allies. The morning after the battle, Native Americans returned to Frenchtown. They plundered and burned homes, killing and scalping many of the remaining American captives, and taking others as slaves. The official U.S. estimate of casualties in this aftermath include a dozen named individuals killed and up to 30 more who were likely killed. British estimated six Americans were killed.

This event became known throughout the United States as the 'River Raisin Massacre'. This was also known as the Battle of Frenchtown (or the Second Battle of the River Raisin). Today, the site of the battle is preserved as the recently authorized River Raisin National Battlefield Park. It has a small visitor center.

Custer’s statue, unveiled in 1910, is located at the corner of Elm Street and Monroe Street.

The area of Frenchtown was renamed after the War of 1812 and incorporated as the village of Monroe in honor of President James Monroe, who visited the Michigan Territory in 1817. In the same year, the city of Monroe was named as the county seat of the newly created Monroe County. Monroe was re-incorporated as a city in 1837.

Settled mostly by American migrants from New York and New England, Monroe also was associated with events in the West in the later 19th century, particularly the Indian Wars. It is known as the childhood home of Major General George Armstrong Custer (1839–1876). His family moved here when he was young, and he lived in Monroe for much of his childhood. Here he later met and in 1864 married Elizabeth Bacon (1842–1933), during the Civil War. He led troops in the Indian Wars and died at the Battle of the Little Bighorn, in which his forces were killed by the Lakota.

In 1910, President William Howard Taft and the widowed Elizabeth Bacon Custer unveiled an equestrian statue of Custer, which now stands at the corner of Elm Street and Monroe Street. Custer is also honored in street names, various historic markers, buildings, schools, and the regional Custer Airport. City limit signs for Monroe describe the city as "the home of General Custer."

The famous La-Z-Boy furniture company, known for reclining easy chairs, was founded in Monroe in 1927. Their world headquarters are still located in Monroe, but in a secluded area south of the intersection of La-Z-Boy Blvd and Stewart Rd. This new facility is roughly 1/2 a mile east of its original location on Telegraph Road; the iconic building still exists and is being prepped for potential redevelopment.

In 1974, the Monroe Power Plant opened. In the early 21st century, it is the fourth-largest coal firing plant in North America. away and are among the tallest structures in the state.

There were 8,238 households of which 34.7% had children under the age of 18 living with them, 41.7% were married couples living together, 17.1% had a female householder with no husband present, 5.3% had a male householder with no wife present, and 35.9% were non-families. 30.6% of all households were made up of individuals and 10.9% had someone living alone who was 65 years of age or older. The average household size was 2.44 and the average family size was 3.05.

According to the United States Census Bureau, the city has a total area of 10.19 square miles (26.39 km2), of which 9.17 square miles (23.75 km2) is land and 1.02 square miles (2.64 km2) is water. Monroe sits at the lowest elevation in state of Michigan, which is the shores of Lake Erie at 571 feet (174 meters). The average elevation of the city of Monroe is 594 feet (182 meters). The Port of Monroe is the only Michigan port on Lake Erie, and Sterling State Park is the only of Michigan's 98 state parks located on or near Lake Erie. The River Raisin and Sandy Creek travel through Monroe, although these waterways are unnavigable.

The city of Monroe is served by the Lake Erie Transit public transportation bus system. Established in 1975, Lake Erie Transit currently has a fleet of 31 buses and serves approximately 400,000 riders every year. In 2008, the system logged 764,000 miles. The system operates buses on eight fixed routes in and around the city of Monroe. It also serves several neighboring townships outside of its normal routes should a passenger call ahead for a ride. From Bedford Township, its provides transportation to and from two shopping malls in Toledo, Ohio.

Monroe, Michigan has only one official sister city:

All content from Kiddle encyclopedia articles (including the article images and facts) can be freely used under Attribution-ShareAlike license, unless stated otherwise. Cite this article:
Monroe, Michigan Facts for Kids. Kiddle Encyclopedia.