The River Raisin is a river in southeastern Michigan, United States, that flows through glacial sediments into Lake Erie. The area today is an agricultural and industrial center of Michigan. The river flows for almost 139 miles (224 km), draining an area of 1,072 square miles (2,780 km2) in the Michigan counties of Lenawee, Washtenaw, Jackson, Hillsdale, and Monroe County, where its mouth at Lake Erie is located. French settlers named it as La Rivière aux Raisins because of the wild grapes growing along its banks, the French word for grape being raisin. The French term for "raisin" is raisin sec (dry grape).

The River Raisin was used by local Potawatomi and Wyandot peoples, who had a portage between the upper river to gain access into the Grand and Kalamazoo rivers flowing west toward Lake Michigan. The river is still classified as canoeable throughout its length. But, low gradient, access issues, frequent logjams in the upper reaches, and 22 dams on the mainstream limit its recreational use. The first European settlement along the river were by French-Canadian colonists, who in the 1780s developed their traditional "ribbon" farms in Frenchtown. These had narrow fronts on the river so that more farmers would have access, with deep rectangular lots reaching back from the river. Now part of Monroe, Michigan, this area is still the most populous area along the river. The resort area of Irish Hills lies in the uppermost region of the watershed, which includes 429 lakes and ponds. The largest of these is the 800-acre (3.2 km2) Lake Columbia.

During the winter of 1813 as part of the War of 1812, the Battle of Frenchtown occurred near the river. British and Native American troops under the command of British General Henry Procter and Native American chiefs Roundhead, Walks in Water, and Split Log, were allied against a division of ill-trained Kentucky infantry and militia under command of General James Winchester. Cut off and surrounded and facing total slaughter, Winchester surrendered with British assurances of safety of the prisoners. The British and Potawatomi allies marched those who could walk to Detroit. But the next day, many of the severely wounded prisoners left in Frenchtown were killed by the Native Americans allies of the British. 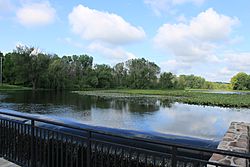 The Massacre of the River Raisin became a rallying cry ("Remember the Raisin") for Americans in the war, particularly for Kentuckians. United States troops returned in the spring to drive the British from Michigan forever. The original battlefield was preserved for years as a county park in Monroe, Michigan. It has several monuments erected to the Kentucky soldiers who died there. On October 12, 2010, the land was transferred to the federal government. By Congressional authorization, it is the only National Battlefield Park designating a battlefield of the War of 1812 - the River Raisin National Battlefield Park.

Since industrialization and intensified agriculture, the river has been polluted by industrial wastes and agricultural runoff. While cleanup efforts have mitigated some of the pollution, difficult-to-remove PCBs continue to constitute a hazardous waste. An established Area of Concern covers only 2 square miles (5.2 km2) of the watershed at the mouth of the river, much of which is devoted to industrial and harbor use, including the Ford Motor Company plant, Detroit Edison Monroe powerplant, and the Port of Monroe. Environmental authorities advise people not to eat some species of fish from the river, if taken below the outlet of the Monroe Dam.

The river has many small dams to control water flow. These were erected to power the many paper mills constructed along it in the mid-1800s during the lumber boom. They are also products of Henry Ford's rural industry program. While most of the dams are in Monroe, the most significant one is located in Dundee, Michigan. The Port of Monroe was constructed near the mouth of the river in the 1930s, as a needed infrastructure project sponsored by the President Franklin D. Roosevelt administration during the Great Depression.

Most of the flow of the river is diverted through the Detroit Edison plant and discharged into Plum Creek. Previously it was discharged into the river, but it is now diverted to limit additional pollution of the river mouth area. The power plant's peak use of 3,000 cu ft/s (85 m3/s) of water exceeds the river's average flow of 741 cu ft/s (21.0 m3/s), so on some occasions, water is drawn upstream from Lake Erie into the plant. The high level of industrial water use is thought to kill large numbers of fish in the intake screens and to make fish migration from the river into the Great Lakes almost impossible.

In 2013 U.S. Rep. Tim Walberg, along with the entire Michigan delegation, introduced a resolution (H. Res. 37, 113th Congress) to honor the 200th anniversary of the battles at the River Raisin. 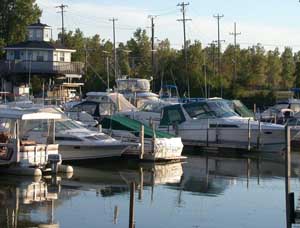 Boats docked near the mouth of River Raisin

In addition to the river forming from the Upper River Raisin and the South Branch River Raisin, the following streams flow into the River Raisin:

The Eagle Island Marsh is part of the Detroit River International Wildlife Refuge.

The River Raisin is home to "warm-water" fish including bluegill, white sucker, channel catfish, walleye, carp, white bass, black buffalo, freshwater drum and smallmouth bass. Very few fish migrate between the river and the Great Lakes because they are blocked by the seven dams in Monroe, as well as the power plant intakes. Bird species use the area as part of the migratory flyway along eastern Lake Erie; they include bald eagles, sandhill cranes, ducks and seagulls. Invasive fauna include zebra mussels and rusty crayfish. The threatened American lotus is present in Eagle Island Marsh, but it must compete with several invasive plant species in the watershed, including flowering rush, Eurasian milfoil, curlyleaf pondweed, Phragmites and purple loosestrife. 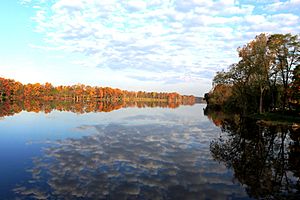 Towns along the river include:

All content from Kiddle encyclopedia articles (including the article images and facts) can be freely used under Attribution-ShareAlike license, unless stated otherwise. Cite this article:
River Raisin Facts for Kids. Kiddle Encyclopedia.