Nelumbo lutea is a species of flowering plant in the family Nelumbonaceae. Common names include American lotus, yellow lotus, water-chinquapin, and volée. It is native to North America. The botanical name Nelumbo lutea Willd. is the currently recognized name for this species, which has been classified under the former names Nelumbium luteum and Nelumbo pentapetala, among others.

American lotus is an emergent aquatic plant. It grows in lakes and swamps, as well as areas subject to flooding. The roots are anchored in the mud, but the leaves and flowers emerge above the water's surface. The petioles of the leaves may extend as much as 2 m (6.6 ft) and end in a round leaf blade 33–43 cm (13–17 in) in diameter. Mature plants range in height from 0.8 to 1.5 m (2.6 to 4.9 ft).

Flowering begins in late spring and may continue into the summer. The specific name means "yellow" in Latin and refers to the flowers, which may be white to pale yellow. The flowers measure 18–28 cm (7.1–11.0 in) in diameter and have 22-25 petals.

It is the larval host plant of the American lotus borer, Ostrinia penitalis.

However, Nelumbo lutea populations are declining in the U.S. due to habitat destruction and have become an endangered species. Their populations have a low level of genetic diversity, showing variation among different populations rather than within populations.

The native distribution of the species is Minnesota to Oklahoma, Florida, Mexico, Honduras, and the Caribbean. 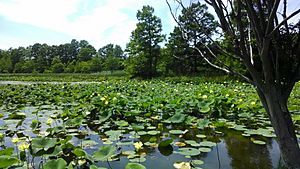 It was apparently distributed northwards in the United States by Native Americans who carried the plant with them as a food source.

This plant has a large tuberous rhizome that is used as a food source. This may be the plant called "macoupin" in Miami-Illinois. The seed is also edible and is known as "alligator corn". The seedlike fruits can be shaken loose, and are also edible. The unopened leaves and young stalks can be cooked.

The species is widely planted in ponds for its foliage and flowers. American Lotus spreads via creeping rhizomes and seeds. This species has been crossed with N. nucifera to create many hybrids. Seeds may be propagated by scarifying the pointed tip of the seed with a file then soaking in water. Propagation is also possible by division of established plants.

All content from Kiddle encyclopedia articles (including the article images and facts) can be freely used under Attribution-ShareAlike license, unless stated otherwise. Cite this article:
Nelumbo lutea Facts for Kids. Kiddle Encyclopedia.