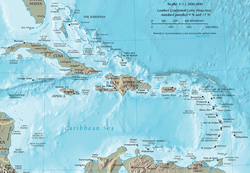 The Caribbean or Caribbean Area (Dutch: Cariben or Caraiben, French: Caraïbe or more commonly Antilles; Spanish: Caribe) is a region of the Americas. It includes the Caribbean Sea, its islands (more than 7,000 islands, small islands and cays, most of them surrounding the sea), and the coastal islands of north South America and east Central America.