Roseau (Dominican Creole: Wozo) is the capital and largest city of Dominica, with a population of 14,725 as of 2011. It is a small and compact urban settlement, in the Saint George parish and surrounded by the Caribbean Sea, the Roseau River and Morne Bruce. Built on the site of the ancient Island Carib village of Sairi, it is the oldest and most important urban settlement on the island of Dominica.

It is on the west (leeward) coast of Dominica and has a combination of modern and colonial French architecture.

There is a prominent diocese called Roman Catholic Diocese of Roseau. 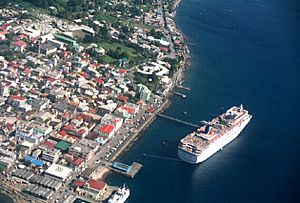 The city of Roseau sits on an alluvial fan formed hundreds of years ago as the Roseau River meandered across the area from what is now known as Newtown to its current location. Over the last 2,000 years, Amerindians migrating through the islands settled the area attracted by the nearby river. With the arrival of the Europeans in the 16th and 17th centuries, a small settlement was established by the French who, in their tradition of naming places after what they found there, used their name for the river reeds that grew along the banks. A plan was created for the settlement that mirrored examples in France where streets extended from a central point — what is today the Old Market — and spread out to the rest of the settlement.

Conflict raged between the French and the British over the area on several occasions. The British gained a stronghold. By the late 18th and early 19th centuries, they set out plans for the city that included fortifications and government structures, the grid street system, and blocks and new urban areas to the north and south, known today as Potter's Ville and Newtown. Goodwill was established in the 1950s and Bath Estate in the early 1980s. Since then several new semi-urban settlements — such as Stock Farm, Castle Comfort, and Wall House — have been constructed around the existing ones. Some older settlements like Fond Cole and Canefield nowadays belong to the semi-urban area around Roseau. 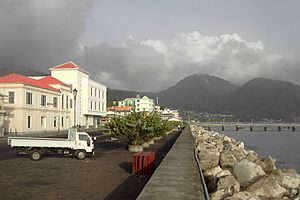 Morne Bruce provides panoramic views of most of downtown Roseau and north toward Woodbridge Bay deepwater port and Fond Cole. From Morne Bruce there are views of the Botanic Gardens at its base as well as the Caribbean Sea which look quite spectacular when cruise liners are in port.

Roseau's climate is a tropical rainforest climate, featuring relatively constant temperatures throughout the year with average high temperatures generally between 28 and 31 °C (82 and 88 °F) and average low temperatures between 19 and 23 °C (66 and 73 °F). Rainfall is common throughout the year, with the city seeing an annual average nearly 2,000 mm (79 in). Roseau features a noticeably drier stretch from February through April, though each of these months on average sees at least 100 mm (4 in) of precipitation.

All content from Kiddle encyclopedia articles (including the article images and facts) can be freely used under Attribution-ShareAlike license, unless stated otherwise. Cite this article:
Roseau Facts for Kids. Kiddle Encyclopedia.