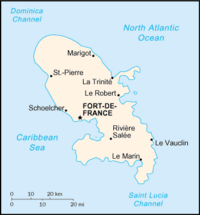 A map of Martinique 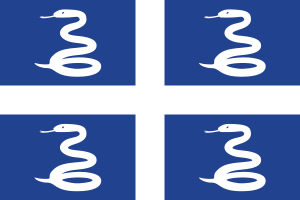 The flag of Martinique

Martinique was known by indigenous peoples of the Caribbean as Madiana or Madinina. It was colonized by the French in the 17th century, and they introduced racist slavery there as they spread it all around the world. France still claims to own the island today, even though there has been an independence movement.

The capital city is Fort-de-France. Other towns include Sainte-Anne and St. Pierre (which was destroyed by a volcano named Mont Pelée in 1902).

Martinique is well known for its zouk music. Artists such as Kassav' have made it famous over the years. Frantz Fanon, an important anti-colonial revolutionary, was born there.

The ethnic makeup of the country is: 90% African and Mixed African with anything from Chinese, East Indian or White. and 10% White, Amerindian, Chinese and East Indian.

All content from Kiddle encyclopedia articles (including the article images and facts) can be freely used under Attribution-ShareAlike license, unless stated otherwise. Cite this article:
Martinique Facts for Kids. Kiddle Encyclopedia.