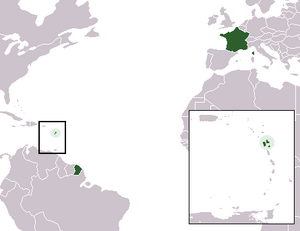 Guadeloupe is part of France in the Caribbean Sea. It is made up of five islands. The capital is Basse-Terre.

Arawak Native Americans first lived on the islands. Most died when Europeans came. Guadeloupe was first governed by the French Company of the American Islands. It was then taken over by England, given to Sweden, and given back to France.

Today, most of the people in Guadeloupe are Roman Catholic and are of African descent.

All content from Kiddle encyclopedia articles (including the article images and facts) can be freely used under Attribution-ShareAlike license, unless stated otherwise. Cite this article:
Guadeloupe Facts for Kids. Kiddle Encyclopedia.