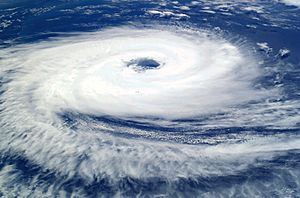 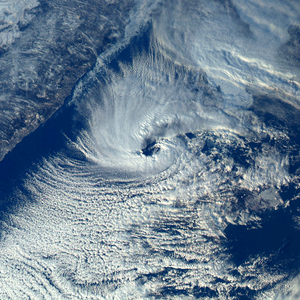 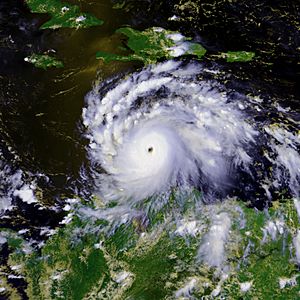 In meteorology, a cyclone is the rotation of a volume of air about an area of low atmospheric pressure. Cyclones are responsible for a wide variety of different meteorological phenomena such as hurricanes and tornadoes. Because of this, most weather forecasters avoid using the term cyclone without a qualifying term.

The center of a cyclone is a low-pressure region. Pressure gradient force, from high- to low-pressure reasons, causes high winds around these regions. Wind flow around a large cyclone is almost anticlockwise, in the northern hemisphere, and clockwise, in the southern hemisphere, due to the Coriolis effect. Anticyclonic large storms are extremely rare on Earth, though Jupiter's Great Red Spot storm is anticyclonic.

Tropical cyclones (also known as tropical storms, hurricanes and typhoons) are cyclones which form over warm ocean waters and draw their energy from the evaporation and condensation of that water. They are characterized by a strong area of low pressure at the surface and an area of higher pressure aloft. Tropical cyclones are associated with strong thunderstorms, high winds, and flooding. They form over the tropic oceans especially in the Carribean region and South East Asia, also affecting the northern parts of Australia.

Extratropical cyclones lie somewhere in between tropical cyclones and mid-latitude cyclones, drawing a portion of their energy through the evaporation and condensation of ocean water, and some if it through horizontal temperature gradients in the atmosphere. Nearly always called by the term low-pressure cells in North America, they often form quickly along cold fronts that have stagnated after moving into an area where warm, moist air exists.

Extratropical cyclones are generally mild storms with surface winds of 7-15 knots. The band of precipitation that is associated with the warm front is often extensive. They tend to move along a predictable path at a moderate rate of progress. They are much more common in the United States than in Europe which is located above the arid Sahara desert. The dry, arid air of the Sahara desert is not conducive to the formation of extratropical cyclones. 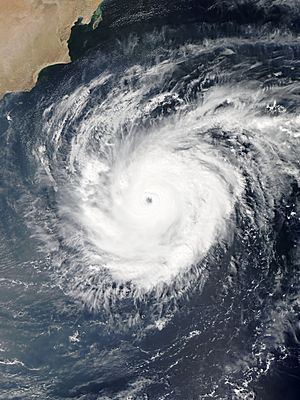 In the North Pacific ocean, the Kuroshio or Japan current moves warm water into the northern North Pacific ocean. In the North Atlantic ocean, the Gulf Stream moves warm water into the northern North Atlantic ocean. The warm water at high latitudes provides the energy that brings on the generation of subpolar cyclones or low-pressure cells that exhibit characteristics which differentiate them from extratropical cyclones.

Photographs taken from man-made satellites have confirmed the existence of a type of cyclone which had not previously been documented. They are intense storms with high winds.

In North America, tornadoes are sometimes described as cyclones because they involve powerful winds around a low-pressure vortex. However, they differ from other cyclones by their very local nature; most cyclones are massive storms, tornados are comparatively small but extremely powerful. Tornados occur on too local a scale for the Coriolis effect to determine the direction of rotation; for this reason, tornado winds sometimes flow anticyclonically, or opposite the direction dictated by the Coriolis effect.

All content from Kiddle encyclopedia articles (including the article images and facts) can be freely used under Attribution-ShareAlike license, unless stated otherwise. Cite this article:
Cyclone Facts for Kids. Kiddle Encyclopedia.