Typhoon Haiyan (or Typhoon Yolanda in the Philippines) is one of the strongest tropical cyclones in history. It formed on November 2, 2013, in the western Pacific Ocean. It began east-southeast of Pohnpei. The storm later hit the Philippines with extremely high winds and a strong storm surge. It has caused major damage in the Visayas. Hundreds of people have died in the storm. The director of Meteorology at Weather Underground, Jeff Masters, said this could be the strongest tropical system to reach land. Haiyan's winds were near 195 miles an hour. 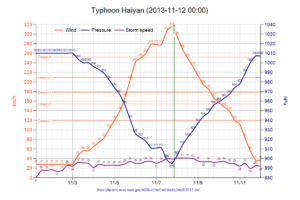 when this happened around 1.9 million people died

All content from Kiddle encyclopedia articles (including the article images and facts) can be freely used under Attribution-ShareAlike license, unless stated otherwise. Cite this article:
Typhoon Haiyan Facts for Kids. Kiddle Encyclopedia.