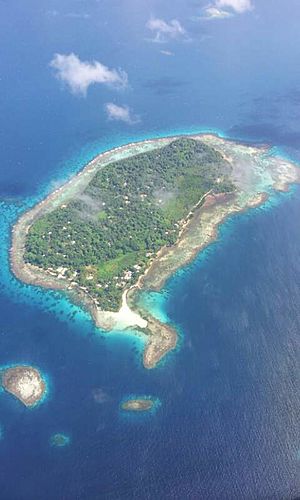 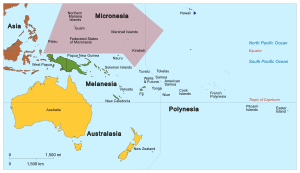 Micronesia is a subregion of Oceania, composed of thousands of small islands in the western Pacific Ocean. It has a shared cultural history with two other island regions, Polynesia to the east and Melanesia to the south.

The region has a tropical marine climate, and is part of the Oceania ecozone. There are four main archipelagos along with numerous outlying islands.

Micronesia is divided politically among several sovereign countries. One of these is the Federated States of Micronesia, which is often called "Micronesia" for short and is not to be confused with the overall region. The Micronesia region encompasses five sovereign, independent nations—the Federated States of Micronesia, Palau, Kiribati, Marshall Islands, and Nauru—as well as three U.S. territories in the northern part: Northern Mariana Islands, Guam, and Wake Island.

Micronesia began to be settled several millennia ago, although there are competing theories about the origin and arrival of the first settlers. The earliest known contact with Europeans occurred in 1521, when Ferdinand Magellan reached the Marianas. The coinage of the term "Micronesia" is usually attributed to Jules Dumont d'Urville's usage in 1832; however, Domeny de Rienzi had used the term a year previously. 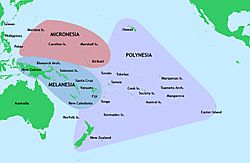 Micronesia is one of three major cultural areas in the Pacific Ocean, along with Polynesia and Melanesia

There are four main island groups in Micronesia:

Plus the island country of Nauru. 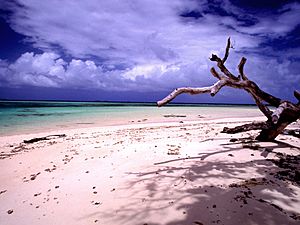 The Marshall Islands are located north of Nauru and Kiribati, east of the Federated States of Micronesia, and south of the U.S. territory of Wake Island. The islands consist of 29 low-lying atolls and 5 isolated islands, comprising 1,156 individual islands and islets. The atolls and islands form two groups: the Ratak Chain and the Ralik Chain (meaning "sunrise" and "sunset" chains). All the islands in the chain are part of the Republic of the Marshall Islands, a presidential republic in free association with the United States. Having few natural resources, the islands' wealth is based on a service economy, as well as some fishing and agriculture. Of the 29 atolls, 24 of them are inhabited.

Bikini Atoll is an atoll in the Marshall Islands. There are 23 islands in the Bikini Atoll. The islands of Bokonijien, Aerokojlol, and Nam were vaporized during nuclear tests that occurred there. The islands are composed of low coral limestone and sand. The average elevation is only about 2.1 metres (7 ft) above low tide level.

Nauru is an oval-shaped island country in the southwestern Pacific Ocean, 42 km (26 mi) south of the Equator, listed as the world's smallest republic, covering just 21 km2 (8 sq mi). With 10,670 residents, it is the second least-populated country, after Vatican City. The island is surrounded by a coral reef, which is exposed at low tide and dotted with pinnacles. The presence of the reef has prevented the establishment of a seaport, although channels in the reef allow small boats access to the island. A fertile coastal strip 150 to 300 m (490 to 980 ft) wide lies inland from the beach.

Wake Island is a coral atoll with a coastline of 19 km (12 mi) just north of the Marshall Islands. It is an unorganized, unincorporated territory of the United States. Access to the island is restricted, and all activities on the island are managed by the United States Air Force.

The majority of the islands in the area are part of a coral atoll. Coral atolls begin as coral reefs that grow on the slopes of a central volcano. When the volcano sinks back down into the sea, the coral continues to grow, keeping the reef at or above water level. One exception is Pohnpei in the Federated States of Micronesia, which still has the central volcano and coral reefs around it.

The region has a tropical marine climate moderated by seasonal northeast trade winds. There is little seasonal temperature variation. The dry season runs from December or January to June, and the rainy season from July to November or December. Because of the location of some islands, the rainy season can sometimes include typhoons.

All content from Kiddle encyclopedia articles (including the article images and facts) can be freely used under Attribution-ShareAlike license, unless stated otherwise. Cite this article:
Micronesia Facts for Kids. Kiddle Encyclopedia.