Polynesians are an ethnolinguistic group of closely related peoples who are native to Polynesia (islands in the Polynesian Triangle), an expansive region of Oceania in the Pacific Ocean. They trace their origins to Island Southeast Asia and are part of the larger Austronesian ethnolinguistic group with an Urheimat ultimately from Taiwan. They speak the Polynesian languages, a branch of the Oceanic subfamily of the Austronesian language family. 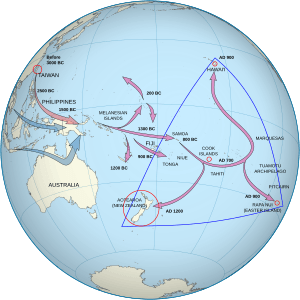 The Polynesian spread of colonization of the Pacific throughout the so-called Polynesian Triangle.

Polynesians, including Samoans, Tongans, Niueans, Cook Islands Māori, Tahitian Mā'ohi, Hawaiian Māoli, Marquesans and New Zealand Māori, are a subset of the Austronesian peoples. They share the same origins as the indigenous peoples of Taiwan, Southeast Asia (especially the Philippines, Malaysia and eastern Indonesia), Micronesia, and Madagascar. This is supported by genetic, linguistic and archaeological evidence.

Chronological dispersal of the Austronesian peoples

There are multiple hypotheses on the ultimate origin and mode of dispersal of the Austronesian peoples, but the most widely accepted theory is that modern Austronesians originated from migrations out of Taiwan between 3000 and 1000 BC. Using relatively advanced maritime innovations like the catamaran, outrigger boats, and crab claw sails, they rapidly colonized the islands of both the Indian and the Pacific oceans. They were the first humans to cross vast distances of water on ocean-going boats. Polynesians are known to have definitely originated from a branch of the Austronesian migrations in Island Melanesia, despite the popularity of rejected hypothesis like Thor Heyerdahl's belief that Polynesians are descendants of "bearded white men" who sailed on primitive rafts from South America.

The direct ancestors of the Polynesians were the Neolithic Lapita culture, which emerged in Island Melanesia and Micronesia at around 1500 BC from a convergence of migration waves of Austronesians originating from both Island Southeast Asia to the west and an earlier Austronesian migration to Micronesia to the north. The culture was distinguished by distinct dentate-stamped pottery. However, their eastward expansion stopped when they reached the western Polynesian islands of Samoa and Tonga by around 900 BC. This remained the furthest extent of the Austronesian expansion in the Pacific for around 1,500 years, during which the Lapita culture in these islands abruptly lost the technology of making pottery for unknown reasons. They resumed their eastward migrations by around 700 AD, spreading to the Cook Islands, French Polynesia, and the Marquesas. From here, they spread further to Hawaii by 900 AD, Easter Island by 1000 AD, and finally New Zealand by 1200 AD.

There are proposals that Polynesians may have also had pre-Columbian contact with the Americas. But evidence for this remains highly contentious. 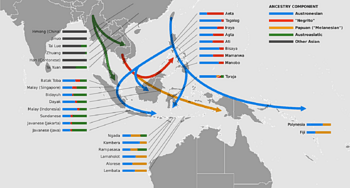 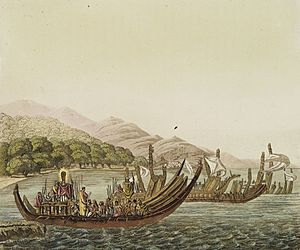 Analysis by Kayser et al. (2008) discovered that only 21% of the Polynesian autosomal gene pool is of Australo-Melanesian origin, with the rest (79%) being of Austronesian origin. Another study by Friedlaender et al. (2008) also confirmed that Polynesians are closer genetically to Micronesians, Taiwanese Aborigines, and Islander Southeast Asians, than to Papuans. The study concluded that Polynesians moved through Melanesia fairly rapidly, allowing only limited admixture between Austronesians and Papuans. Polynesians belong almost entirely to the Haplogroup B (mtDNA) and thus the high frequencies of mtDNA B4a1a1 in the Polynesians are the result of drift and represent the descendants of a few Austronesian females who mixed with Papuan males. The Polynesian population experienced a founder effect and genetic drift. As a result of founder effect, the Polynesian may be distinctively different in both genotypically and phenotypically from the parent population from which it is derived, this is due to new population being established by a very small number of individuals from a larger population which also causes a lost of genetic variation.

Soares et al. (2008) have argued for an older pre-Holocene Sundaland origin in Island Southeast Asia (ISEA) based on mitochondrial DNA. The "out of Taiwan model" was challenged by a study from Leeds University and published in Molecular Biology and Evolution. Examination of mitochondrial DNA lineages shows that they have been evolving in ISEA for longer than previously believed. Ancestors of the Polynesians arrived in the Bismarck Archipelago of Papua New Guinea at least 6,000 to 8,000 years ago.

A 2014 study by Lipson et al. using whole genome data supports the findings of Kayser et al. Modern Polynesians were shown to have lower levels of admixture with Australo-Melanesians than Austronesians in Island Melanesia. Regardless, both show admixture, along with other Austronesian populations outside of Taiwan, indicating varying degrees of intermarriage between the incoming Neolithic Austronesian settlers and the preexisting Paleolithic Australo-Melanesian populations of Island Southeast Asia and Melanesia.

Other studies in 2016 and 2017 also support the implications that the earliest Lapita settlers mostly bypassed New Guinea, coming directly from Taiwan or the northern Philippines. The intermarriage and admixture with Australo-Melanesian Papuans evident in the genetics of modern Polynesians (as well as Islander Melanesians) occurred after the settlement of Tonga and Vanuatu. 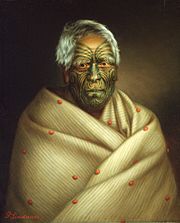 A portrait of Māori man, by Gottfried Lindauer. 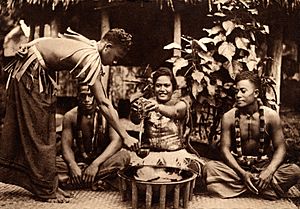 Kava ('ava) makers (aumaga) of Samoa. A woman seated between two men with the round tanoa (or laulau) wooden bowl in front. Standing is a third man, distributor of the 'ava, holding the coconut shell cup (tauau) used for distributing the beverage.

There are an estimated 2 million ethnic Polynesians and many of mix Polynesian descent worldwide, the majority of whom live in Polynesia, the United States, Australia and New Zealand. The Polynesian peoples are shown below in their distinctive ethnic and cultural groupings (estimates of the larger groups are shown):

Polynesian persons are noted to have, on average, larger bone structure and muscle mass than Caucasian persons, which has implications for BMI (Body Mass Index) comparability in measuring obesity. Polynesians' physical characteristics help them perform well in some physical sports, including American football and rugby.

All content from Kiddle encyclopedia articles (including the article images and facts) can be freely used under Attribution-ShareAlike license, unless stated otherwise. Cite this article:
Polynesians Facts for Kids. Kiddle Encyclopedia.