Kava or kava kava is a crop of the Pacific Islands. The name kava(-kava) is from Tongan and Marquesan, meaning "bitter". Kava is consumed throughout the Pacific Ocean cultures of Polynesia, including Hawaii and Vanuatu, and Melanesia and some parts of Micronesia for its sedating effects.

The root of the plant is used to produce a drink with sedative, anesthetic, and euphoriant properties. Its active ingredients are called kavalactones. A Cochrane systematic review concluded it was likely to be more effective than placebo at treating short-term anxiety.

Moderate consumption of kava has been deemed as presenting an "acceptably low level of health risk" by the World Health Organization. However, consumption of kava extracts produced with organic solvents or excessive amounts of poor quality kava products may be linked to an increased risk of adverse health outcomes (including potential liver toxicity). 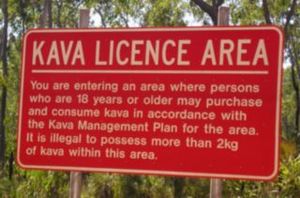 A sign showing a "Kava licence area" at Yirrkala, in the Northern Territory of Australia

All content from Kiddle encyclopedia articles (including the article images and facts) can be freely used under Attribution-ShareAlike license, unless stated otherwise. Cite this article:
Kava Facts for Kids. Kiddle Encyclopedia.