The Independent State of Samoa is a country in Pacific Ocean. It became independent from New Zealand in 1962. It has two islands, including Upolu and Savai'i. The capital of Samoa is Apia. It is on the island of Upolu. The head of the country is Va'aletoa Sualauvi II.

The languages spoken in Samoa include Samoan and English.

The sport that is most popular in Samoa is Rugby, and many Samoan people play Rugby.

Samoa was admitted to the United Nations on 18 September 1962.

A measles outbreak began in October 2019 and continued through December. As of December 28, there were 81 deaths out of 5667 cases.

Samoa has eleven political districts. These are called itūmālō. These are the traditional eleven districts that were made well before European arrival. 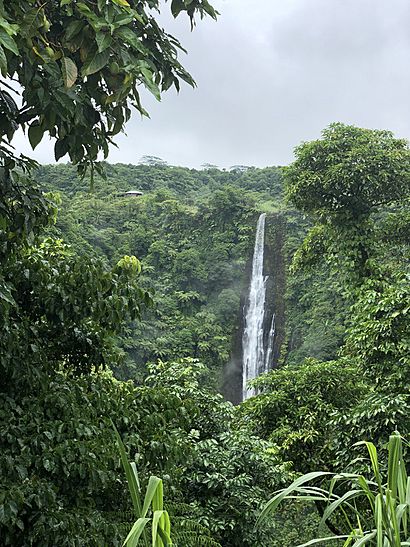 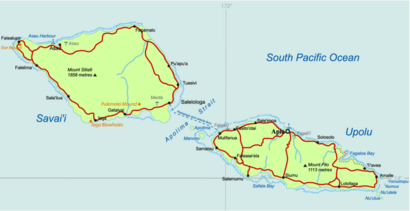 A map of Samoa. 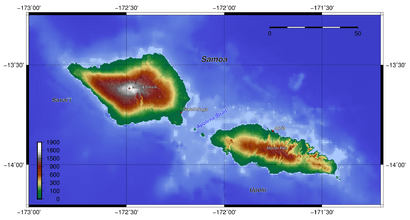 Samoa lies south of the equator, about halfway between Hawaii and New Zealand, in the Polynesian region of the Pacific Ocean. The total land area is 2,842 km2 (1,097 sq mi), consisting of the two large islands of Upolu and Savai'i (which together account for 99% of the total land area) and eight small islets.

The main island of Upolu is home to nearly three-quarters of Samoa's population, and to the capital city, Apia.

The Samoan islands result geologically from volcanism, originating with the Samoa hotspot, which probably results from a mantle plume. While all of the islands have volcanic origins, only Savai'i, the westernmost island in Samoa, remains volcanically active, with the most recent eruptions at Mt Matavanu (1905–1911), Mata o le Afi (1902) and Mauga Afi (1725). The highest point in Samoa is Mt Silisili, at 1858 m (6,096 ft). The Saleaula lava fields situated on the central north coast of Savai'i result from the Mt Matavanu eruptions, which left 50 km2 (20 sq mi) of solidified lava.

Savai'i is the largest of the Samoan islands and the sixth-largest Polynesian island (after New Zealand's North, South and Stewart Islands and the Hawaiian islands of Hawaiʻi and Maui). The population of Savai'i is 42,000 people.

Samoa has an equatorial/monsoonal climate, with an average annual temperature of 26.5 °C (79.7 °F) and a rainy season from November to April. 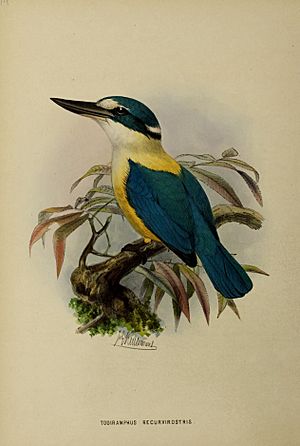 The flat-billed kingfisher (Todiramphus recurvirostris) is a species of bird in the family Alcedinidae. It is endemic to Samoa.

Samoa forms part of the Samoan tropical moist forests ecoregion. Since human habitation began, about 80% of the lowland rainforests have disappeared. Within the ecoregion about 28% of plants and 84% of land birds are endemic.

There are nine mammal species in Samoa, of which one is endangered and two are vulnerable.

Samoa has many whales, dolphins and porpoises in it's waters. They are the mammals most fully adapted to aquatic life with a spindle-shaped nearly hairless body, protected by a thick layer of blubber, and forelimbs and tail modified to provide propulsion underwater.

The birds of Samoa include a total of 82 species, of which ten are endemic, five have been introduced by humans and 23 are rare or accidental. Seven species are globally threatened. 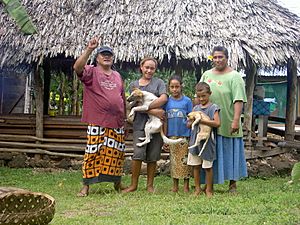 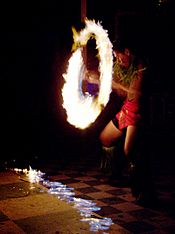 Religion in Samoa includes the following: Christian Congregational Church of Samoa 35.5%, Roman Catholic 19.6%, Methodist 15%, Latter-day Saints 12.7%, Samoan Assemblies of God 10.6%, Seventh-day Adventist 3.5%, Worship Centre 1.3%, unspecified 0.8%.There is also about 522 Jehovah's Witnessses in Samoa since 1931. Samoa has one of seven Bahá'í Houses of Worship in the world. It is in Tiapapata.

Many people say that Samoan people are related to Māori people because lots of the language words are very similar to Maori language.

As with other Polynesian cultures (Hawai'ian, Tahitian and Māori), Samoans have two gender specific and culturally important tattoos. For males, it is called the Pe'a, It is intricate and geometrical patterns tattooed on areas from the knees up towards the ribs. A male who has such a tatau is called a soga'imiti. A Samoan girl or teine is given a malu. It covers the area from just below her knees to her upper thighs. 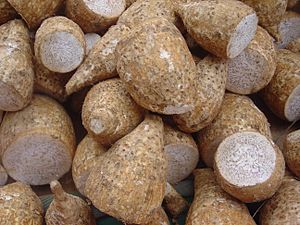 Taro, a root crop, traditionally was Samoa's largest export, generating more than half of all export revenue in 1993. A fungal blight decimated the plants, and in each year since 1994 taro exports have accounted for less than 1% of export revenue.

The United Nations has classified Samoa as an economically developing country since 2014.

The country's currency is the Samoan tālā, issued and regulated by the Central Bank of Samoa.

The economy of Samoa has traditionally been dependent on agriculture and fishing at the local level. Samoan exports feature coconut cream, coconut oil, noni (juice of the nonu fruit, as it is known in Samoan), and copra.

In the period before German colonisation, Samoa produced mostly copra. German merchants and settlers were active in introducing large scale plantation operations and developing new industries, notably, cocoa bean and rubber, relying on imported labourers from China and Melanesia. When the value of natural rubber fell drastically, about the end of the Great War (World War I), the New Zealand government encouraged the production of bananas, for which there is a large market in New Zealand.

Other agricultural industries have been less successful. Sugarcane production, originally established by Germans in the early 20th century, could be successful. Old train tracks for transporting cane can be seen at some plantations east of Apia. Pineapples grow well in Samoa, but beyond local consumption have not been a major export.

Sixty percent of Samoa's electricity comes from renewable hydro, solar, and wind sources, with the remainder from diesel generators. The Electric Power Corporation has a goal of 100% renewable energy by 2021.

All content from Kiddle encyclopedia articles (including the article images and facts) can be freely used under Attribution-ShareAlike license, unless stated otherwise. Cite this article:
Samoa Facts for Kids. Kiddle Encyclopedia.